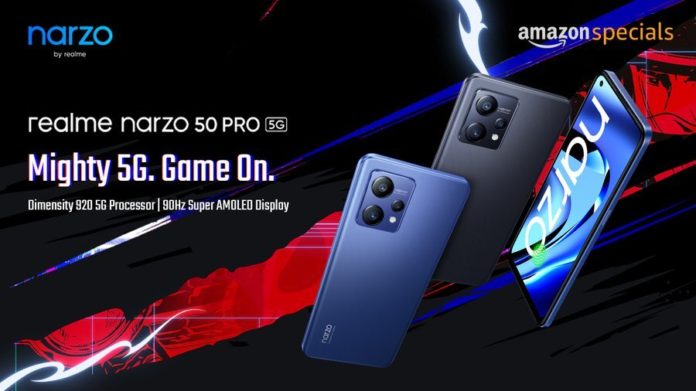 Realme held a launch event today where it launched the Narzo 50 5G Series in India. The lineup has the Realme Narzo 50 5G and the Narzo 50 5G Pro, the new devices have been made exclusively for the younger user base of the brand, while the vanilla variant arrives with a dual-camera setup, the Pro version has a triple camera setup. Let us take a detailed look at the specs of these devices:

The Narzo 50 Pro features a 6.4″ Full HD+ Super AMOLED display with a 90Hz refresh rate and a peak brightness of 1000 nits. It runs on Android 12 OS with Realme UI 3.0 on top and it has a layer of the Corning Gorilla Glass 5 on the display for enhanced protection. The device runs on MediaTek’s Diemensity 920 chipset that has been paired with up to 8GB RAM and 128GB internal storage.

In terms of optics, the device flaunts a triple camera setup with a 48MP Samsung S5KGM1ST primary sensor with an f/1.79 aperture, 8MP ultrawide angle shooter, and a macro shooter. On the front, it has a 16MP selfie shooter.

Realme has provided connectivity options such as 5G, 4G LTE, WiFi, Bluetooth, GPS/A-GPS, and a USB Type-C port. The device has an integrated fingerprint sensor for biometrics which also doubles down as a heart rate sensor.

The first sale for the device will begin on the 26th of May at 12 PM via Amazon, Realme.com, and other offline retailers.

The Realme Narzo 50 5G vanilla variant arrives with a 6.6″ Full HD+ display with a refresh rate of 90Hz, the device runs on Android 12 OS with Realme UI 3.0 on top. It has a touch sampling rate of 180Hz and a peak brightness of 600 nits.

The device is powered by the MediaTek DImensity 810 chipset along with ARM Mali-G57 MC2 GPU and up to 6GB LPDDR4x RAM. In the optics department, it has a 48MP primary sensor with an f/1.8 aperture, along with a monochrome portrait sensor. It also features an LED flash.

On the front, it has an 8MP selfie camera with an f/2,0 aperture. The device has 128GB of storage with an option to expand it via a microSD card all the way to 1TB. In terms of connectivity options, Realme has integrated 5G, 4G LTE, WiFi, Bluetooth, GPS/A-GPS, and a USB Type-C port. For biometrics, the device has a side-mounted fingerprint sensor.

It will be available via Amazon, Realme.com, and other offline retailers. Both the devices arrive in Hyper Black and Hyper Blue colors. Share your thoughts on the Realme Narzo 50 Series with us in the comments below!