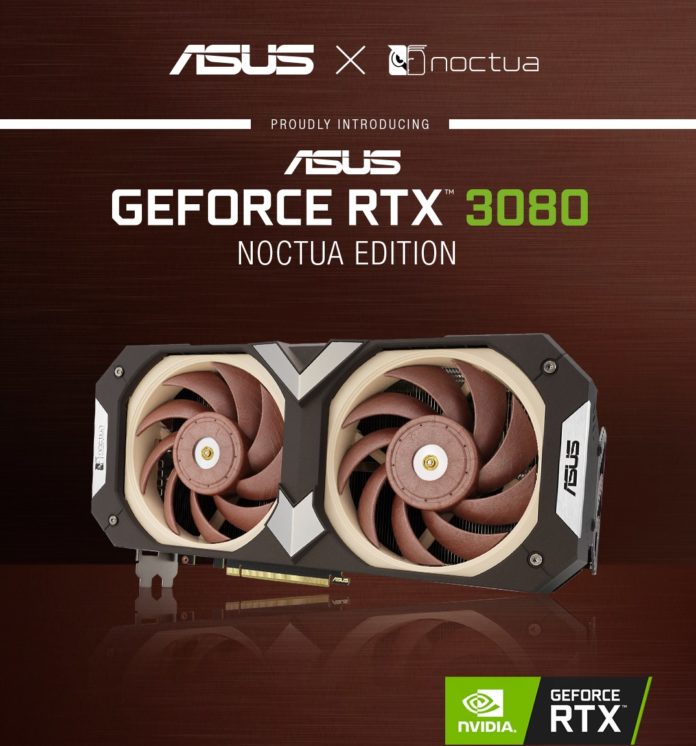 Thermals and acoustics of ASUS’ original TUF Gaming GeForce RTX 3080 could be significantly improved for the Noctua Edition by replacing the stock of three 92mm fans with two of Noctua’s award-winning NF-A12x25 120mm fans and customizing the heatsink to take advantage of the fans’ superior aerodynamic performance.

When the fans are run at maximum speed, as they may be in worst-case scenarios like totally taxing the card in poorly ventilated environments or with extremely high ambient temperatures, the noise levels are reduced by 8.6 dB(A), and the memory remains 12°C cooler. The Noctua Edition improves GPU and VRAM temperatures while running more than 4dB(A) quieter at medium fan speeds.

Overall, the Noctua Edition reduces noise levels over the whole speed range, with the most noticeable reduction of nearly 9dB(A) at maximum fan speed and 2-5dB(A) at lower speeds.

Reduced noise levels are accompanied by lower GPU temperatures and significant memory temperature reductions of up to 22°C. The change in heatsink design from a system with separate heatsinks on the VRAM to one with a larger copper base that covers not only the GPU but also the VRAM allowed for lower memory temperatures.

The heat released by the memory chips is transported to the same big fin-stacks as the heat emitted by the GPU via the copper base and six heat pipes. These massive heatsinks, which are cooled by two NF-A12x25 fans, are far more efficient than the separate smaller ones used in the original design, resulting in a better balance between GPU and VRAM temperatures and avoiding circumstances when memory cooling becomes a bottleneck.

The GeForce RTX 3080 model, like the GeForce RTX 3070 Noctua Edition, comes with a dual BIOS that lets users choose between a performance configuration with the lowest GPU temps and a quiet option with slightly higher temperatures for the best possible acoustics. The quiet profile is set as the default to meet the needs of Noctua’s customers.

The bundled ASUS GPU Tweak II software, as well as the impending beta-version GPU Tweak III, give additional features such as custom fan curves and undervolting for enthusiasts who want to go even farther.

By lowering the card’s thermal output, undervolting makes it possible for it to run even quieter. Reduced GPU voltage of roughly 100mV, for example, can lower GPU temperatures by several degrees, increasing the thermal margin and slowing the fans even more.

When the GPU temperature drops below 50°C, the GeForce RTX 3080 Noctua Edition has a semi-passive fan control arrangement (ASUS 0dB technology) that can turn the fans off completely.

This means that during lower GPU loads, such as during office productivity tasks, web browsing, or light gaming, the card can run completely fanless in common settings with low to moderate ambient temperatures and well-ventilated environments.

Previous articleSony reveals new PlayStation Plus Subscription tiers: Know Everything
Next articleBuyers of the Tesla Model 3 and Model Y in Australia should expect a 12-month wait