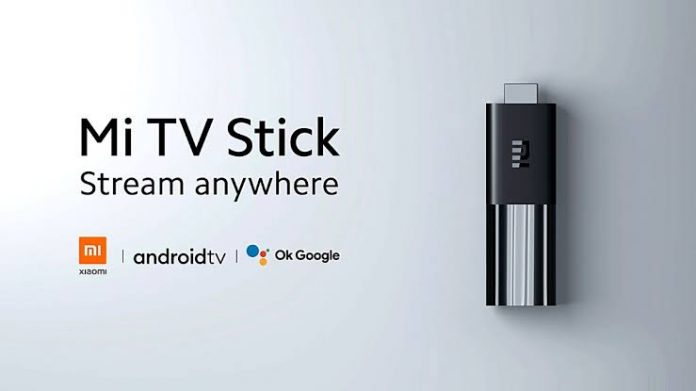 Xiaomi made a lot of product announcements in Europe including the Mi curved gaming monitor and the much speculated Mi TV Stick with Android TV OS. Previously, Xiaomi launched its Mi Box 4K with Android TV OS and 4K support but the company has launched another budget option to convert your non-Smart TV to a smart one.

Launched specifically for the Eurpean market, the Mi TV Stick looks alike to the Fire TV Stick by Amazon but runs on Android TV OS which is a great feature as it’s clean stock Android OS on TV with support for installing apps and watch anything you want. The Mi TV Stick is almost alike to the Mi Box 4K in terms of features and functionalities but it supports up to 1080p resolution.

On the software front, the Mi TV Stick runs on Android TV 9.0 and also comes with built-in Chromecast support. Also, the dongle seems very small and compact but still houses an quad-core Cotex A53 processor with ARM Mali-450 GPU. It comes with 1GB of RAM and 8GB eMMC storage, so that you can have a lot of apps installed from Play Store.

Some popular apps like YouTube, Netflix and Amazon Prime Video comes pre-installed without much bloatware as such. The HDMI 2.0 dongle uses a micro USB power port for charging and supports Wi-Fi 802.11 ac dual-band (2.4GHz / 5GHz) Wi-Fi. For audio, you get Dolby Audio and DTS Surround Sound experience.

The remote uses Bluetooth 4.2 to connect to the dongle and it looks similar to any Mi TV or Mi Box 4K remote, it sports a power on/off button, the minimalistic cursors, apps, home and back buttons. While the volume up and down buttons are at the bottom, there are two dedicated buttons for Netflix and Prime Video and obviously, a Google Assistant button for convenience.

Overall, both of the Mi TV Stick and its slim TV remote looks great and gives a premium feel. The Mi TV Stick with Android TV OS can be a great option for buyers who look forward to making their TV a Smart TV one without spending much as its priced 39.99 euros (about Rs. 3,435) in Europe to compete against the likes of Amazon’s Fire TV Stick or Roku streaming stick, which are very popular in Western countires.

Previous articleRealme announces their new 125W UltraDART fast charging: up to 33% in just 3 minutes
Next articleFIFA World Cup Qatar 2022: The match schedule has been confirmed by FIFA