Google Pixel 6 vs Apple iPhone 13: The Comparison of the Bests 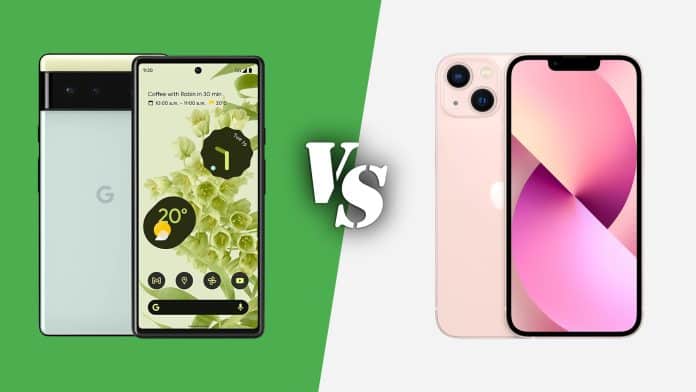 Google recently unveiled its latest flagship Pixel 6 lineup with a ton of upgrades over the Pixel 5 Series. This year, the lineup consists of the Pixel 6 and the Pixel 6 Pro phones.

Apple also revealed their iPhone 13 lineup earlier this month, an amazing lineup with 3 devices, the highlight of them being the A15 Bionic chipset.

What is the most fascinating about both these lineups is that both Google and Apple have integrated custom chipsets into their flagship phones, the Tensor and A15 Bionic respectively. So in essence, this comparison would be like comparing apples and oranges, as both the tech giants have created chips that would cater best to their flagship devices.

For performance, the Pixel 6 and iPhone 13 use custom chips as mentioned. Apple does get the edge here by a bit as the A15 Bionic is probably the best mobile chipset and is faster than even Qualcomm’s Snapdragon 888 and Samsung’s Exynos 2100 chipset.

The Tensor chip on the other hand is said to be 80% faster than the Snapdragon 765G on the Pixel 5, but Google’s main focus with this chip was to enhance the users’ AI and ML experience.

Coming to the display of the devices, both the Pixel 6 and the iPhone 13 have OLED panels, although the panel on the iPhone comes with a slightly higher resolution. Apple has integrated Dolby Vision Support into the iPhone 13’s screen as well.

The Google Pixel 6 has a high refresh rate panel, a good screen resolution, and a rather compact design.

In terms of battery life, the Google Pixel 6 has a bigger battery in comparison to the iPhone 13. However, battery consumption works differently on iOS and if we go by Apple’s claims, the iPhone 13 offers excellent battery life.

However, Google’s Pixel 6 has a large battery that will deliver better longevity in comparison to the iPhone 13.

Both the devices come with wired and wireless fast charging support. Google and Apple do not offer adapters in the box.

Coming to the camera specs of the Google Pixel 6, it has a dual setup on the rear with a 50MP+12MP setup and an 8MP front camera. It has AI capabilities and is sure to deliver some amazing shots.

The iPhone 13 also has a dual-camera setup with a 12MP primary sensor with f/1.6 aperture, dual-pixel PDAF, sensor-shift OIS, and a 12MP ultrawide sensor. It has a 12MP selfie shooter as well.

The Pixel 6 reigns supreme here but ultimately it all comes down to the software as that is what plays a major role in the overall image quality.

The Pixel 6 has undergone the biggest design change since the previous generations while Apple has not made that significant of changes to the iPhone 13 from a design standpoint.

The iPhone 13 does have a smaller notch than the previous generation. Additionally, both the Pixel 6 and the iPhone 13 opt for a glass front and back and an aluminum frame.

Do I even need to mention who wins this battle? The Pixel 6 is priced pretty well but unfortunately, availability may be an issue as Google has released it in only 8 global markets.

Which device is better according to you? Let us know!

boAt Rockerz 205 Pro launches with Bluetooth 5.2, BEAST Mode and more at Rs.999 only