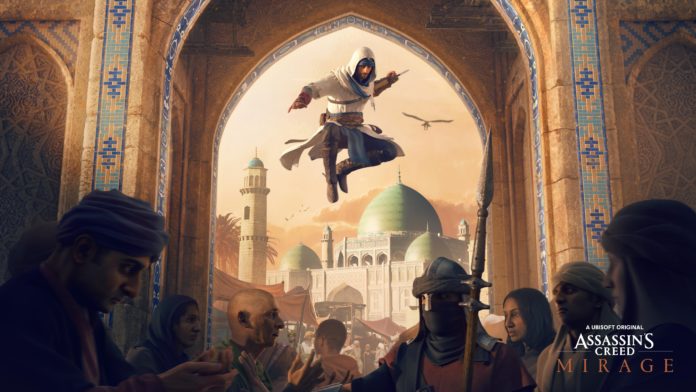 Finally, we get to know about the name of the next Assassin’s Creed game, and it will be called the Assassin’s Creed Mirage following Assassin’s Creed Valhalla that launched almost two years back. As we know this is one of the most popular franchise by Ubisoft and it has consistently been delivering new games every two years now.

To continue that trend for years, Ubisoft via Assassin’s Creed’s social media handles has announced that Assassin’s Creed Mirage will be announced on September 10th at its annual event called Ubisoft Forward that will held be on 12PM PT.

Assassin’s Creed Mirage – What Can You Expect?

As we can see from the poster, the scene hovers around an old era as the soldiers can be seen using spears and a form of old market is depicted. Interestingly, this will be the thirteenth major installment by Ubisoft and the Assassin you notice as we know is Basim, the same character from Assassin’s Creed Valhalla in his iconic white robes.

The blue and red sleeves as well as the sword does match his character and so his role in the upcoming Assassin’s Creed Mirage game will be interesting because as it stands, Ubisoft will somehow continue the journey of Basim into this new game.

Previously, we heard rumours that an expansion would come of the game which indeed has been turned out to be a standalone game, launching this year. This seems true and if rumours are to be believed this game won’t be as humongous as we have seen with the last two Assassin’s Creed titles including Valhalla and Odyssey but will focus more on the actions along with story.

More will eventually be discussed as next week Ubisoft launches the game alongside other games as it does during its annual event and also gamers can expect upcoming Assassin’s Creed Infinity, which could turn out to be a mix and match of various Assassin’s Creed games in last 15 years and act as a new universe altogether.

Let’s see what Ubisoft have in-store for us on September 10th! We predict the game will be made available to play in November as it was previously with Valhalla.