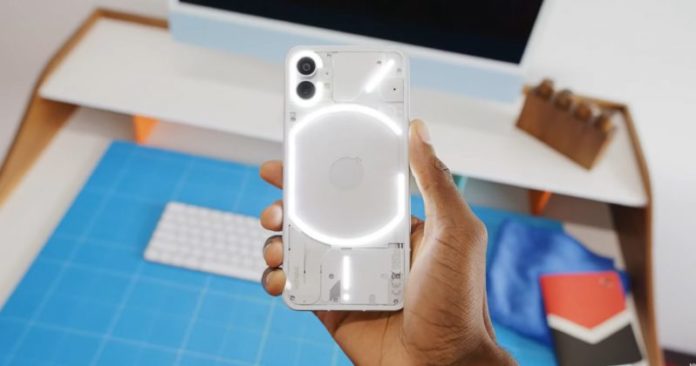 Carl Pei-backed Nothing is preparing to launch its debut smartphone, the Phone (1) very soon and it is set to launch on the 12th of July at the “Return to Instinct,” event. Days before the official launch, a report from RootMyGalaxy reveals certain key specs, the storage, and the pricing of the smartphone. Let us take a look.

Nothing Phone (1) will first be delivered to Indian customers:

So far, the leaks and teasers of this phone have appeared only in White but the latest report reveals a black version of it as well. The report goes on to add that we will see the smartphone in three configurations such as an 8GB+128GB one, an 8GB+256GB one, and a 12GB+256GB version.

In terms of pricing, the Phone (1) will retail for $397 for the base variant which amounts to Rupees 31,000. The higher-end variants will cost $419 or Rs. 32,000 and $456 or Rs.36,000 respectively. Nothing seems to be prioritizing Indian customers first as the smartphones will first be delivered there while other users will get them towards the end of July.

So far, here is what we know about the Nothing Phone (1), it arrives with a 6.55″ OLED display with a 120Hz display and it is powered by the Snapdragon 778G Plus chipset paired with up to 12GB LPDDR5 RAM with provision for the Virtual RAM feature and UFS 3.1 storage. In terms of battery, we will see a 4,500mAh battery with support for 45W charging. It runs on Android 12-based Nothing OS.

In terms of optics, we will see a 50MP primary sensor along with a 16MP secondary lens and on the front, it has a 16MP shooter. Apart from this, the smartphone has an in-display fingerprint scanner, 5W reverse wireless charging, and stereo speakers with Dolby Atmos certification. In terms of connectivity, the device supports 5G, 4G LTE, WiFi, Bluetooth v5.2, and a USB Type-C port for charging and data transfer. Are you excited about the Nothing Phone (1)? Do let us know!

Previous articleThe Ghostbusters: Afterlife has confirmed the official Release Schedule
Next articleDizo Buds P with a 40-hour battery life launched along with ENC