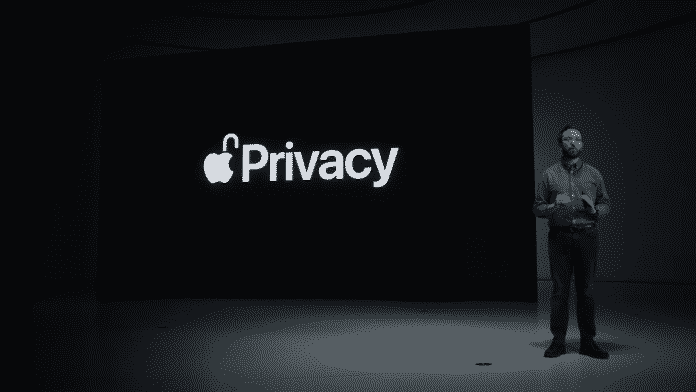 Apple has announced it’s upcoming latest security and privacy focused upgrades this week at Worldwide Developers Conference held this week at the San Jose Conference Center. All the new features were discussed in detail in the keynote speech which nearly continued for 2 hours via memoji filled content to make it more interesting.

1) Password-free login with the use of iCloud keychain:

Building password-free systems is one of the current agendas which are in the works by Apple. The security data which was earlier required to login will be replaced by a passcode along with the user’s Touch ID and Face ID. All these data will be uploaded to the iCloud which in turn will sync all your data into apple devices just with your username and all you would have to do is to use your touch ID or face ID to login.

Hence, there will no longer be a need to remember passwords in order to login websites or apps. You will have your password literally at the tip of your fingers.

An Apple authentication experience engineer stated “Because it’s just a single tap to sign in, it’s simultaneously easier, faster and more secure than almost all common forms of authentication today.”

iPhone users have been able to see which applications are using the microphone at the moment via a green or orange indicator in the status bar. However, Macbook and iMac pro users have been derived of this feature.

In Apple’s latest OS update many latest privacy enhancing tools have been introduced while some of the most noteworthy are Mail Privacy Protection and App Privacy Reports some users did not focus on the also new feature called Secure paste.

Apple stated “With secure paste, developers can let users paste from a different app without having access to what was copied until the user takes action to paste it into their app,”  “When developers use secure paste, users will be able to paste without being alerted via the [clipboard] transparency notification, helping give them peace of mind.”

With online scams and frauds along with hacking has been an issue on the rise ever since the pandemic as most of the transactions are online now in accordance to COVID protocols. To protect it’s users from this threat Apple is testing their new feature called Advanced Fraud Protection for Apple Card.

This new feature will be able to generate new security codes for every transaction or the CVV you enter at the end of payment which will make it nearly impossible to steal your payment details as even you won’t know your next security code until you generate it.

While due to COVID-19 all the users have to wear masks while going outside however this makes using your Face ID impossible while doing payments using Apple Pay. To avoid this scenario Apple had introduced a feature in the iOS 14.5 where users could simply continue the transactions using their watches via Apple Pay.

This new update is an extension to this feature where the user will be able to unlock their phones using their Apple watches given that the watch is near wrist, passcode protected and has a secure connection to your iPhone.

“Use the secure connection to your Apple Watch for Siri requests or to unlock your iPhone when an obstruction, like a mask, prevents Face ID from recognizing your Face.”

Users who are not willing to update their iPhones to the latest available version of iOS will now be able to receive the latest security features whatsoever with the introduction this features. Apple will be releasing security patches for all the the versions of iOS.

Apple says “iOS now offers a choice between two software update versions in the Settings app,” Apple further states “You can update to the latest version of iOS 15 as soon as it’s released for the latest features and most complete set of security updates. Or continue on ‌iOS 14‌ and still get important security updates until you’re ready to upgrade to the next major version.”

7)‘Erase all contents and settings’ for Mac:

Remember when you wanted to format your MacBook and had to uninstall the whole MacOS and then again install the OS all over again in order to format you PC and how much time it used to take. But now those days are gone.

Now, you’ll be able to erase all your user data and setting from your MacBook just like you were able to format your iPhone or iPad as Apple are simply adding an option to do that in the settings in their upcoming macOS Monterey.