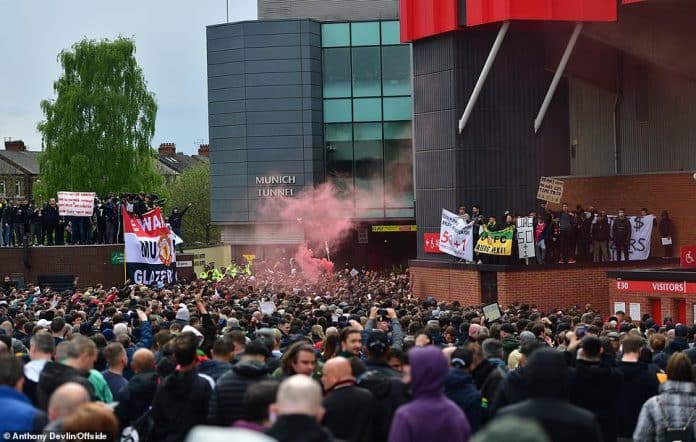 Manchester United fans have broken into the stadium, smashing equipment and climbing on goals, to demand Glazers sell the club. They headed onto the pitch ahead of their Premier League match with Liverpool on Sunday afternoon.

The fans are protesting against Manchester United’s American owners, the Glazer family, in the wake of the doomed European Super League project. A huge crowd had assembled outside Old Trafford hours before the match and set off smoke flares.

Then several dozen protesters breached security cordons to get inside the stadium and onto the pitch. The match, which was about to kick off at 4.30 pm local time, was delayed as the players could not reach the stadium in time.

Some group of fans also tried to blockade the Lowry Hotel where United players are staying to prevent them from boarding the team bus. They were pushed back by police in riot gear as the players remained in the hotel awaiting news about the game.

Now, the Manchester United vs Liverpool match has been officially postponed.

Manchester United has published an official statement: “Following discussion between the Police, The Premier League, Trafford Council and the clubs, our match against Liverpool has been postponed due to safety and security considerations around the protest today. Discussions will now take place with the Premier League on a revised date for the fixture.”

“Our fans are passionate about Manchester United, and we completely acknowledge the right to free expression and peaceful protest.”

“However, we regret the disruption to the team and actions which put other fans, staff, and the police in danger. We thank the police for their support and will assist them in any subsequent investigations.”