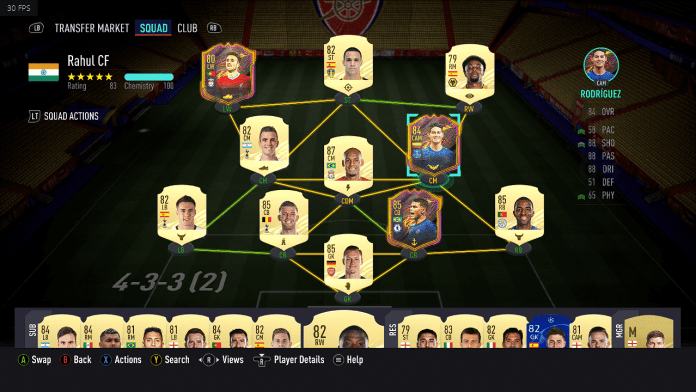 The highly anticipated FIFA 21 has finally arrived. The FIFA fans are quite liking the game at this instance. The gameplay has improved with fluid movements, though the passing has become a bit worse and defending has also become a little tough. Overall, it has been a great game so far and it remains to be seen how EA develops the game as time passes by.

FIFA Ultimate Team (FUT) is one of the most played modes in FIFA. So it has been just a few days since all the fans have started their FUT teams.

We have already given you tips for making your Premier League FUT starter team for 30,000 coins and 70,000 coins.

Also, we have provided you with a trick to get around 70,000 FIFA coins almost for free, just by playing your first 10 FUT matches!

So, here’s a few upgrades which you can make in your Premier League FUT starter team.

Now, getting started into the best Premier League FUT starter team under 100,000 coins. I have used the 4-3-3 (2) formation which I like quite a lot these days.

The Arsenal goalkeeper has been great under the bars in recent times, so his FIFA card also reflects the same. He is one of the best Premier League goalkeepers in FIFA 21 only behind Alisson, Ederson and De Gea.

Pereira is the second-highest-rated Premier League right-back only behind Alexander Arnold. He has a pretty good pace along with good defending. So this makes him one of the best in his position.

The former PSG captain, who recently joined Lampard’s Chelsea is a great defending option. Silva has great defending statistics and is pretty good at intercepting through balls or covering your opponent’s attackers. He will also form a green link with CDM Fabinho. And, if you have got his Ones to Watch card from SBC then it’s cherry on the top.

One of the highest-rated Premier League defenders, Alderweireld has great defending with 87 rating. He also has decent short and long pass so it will help you to play the ball from the back. Along with that, he will give a green link with your LB Sergio Reguilon.

The former Real Madrid left-back is pretty good at defending and at crossing the ball as well. He has decent pace and defending. The Spurs player will form a great partnership with Alderweireld as well.

The Brazilian midfielder is the highest-rated defensive midfielder in the Premier League. Fabinho is absolutely perfect to guard your centre backs against counter attacks as well as going forward to give occasional assists and score goals himself as well. He will also have a green link with his Brazilian counterpart, Thiago Silva, at CB.

Arguably the best transfer of the Premier League till now, James has added a different dimension to the Everton midfield. Just look at his shooting, passing and dribbling stats in FIFA 21 and you could definitely get the idea how he can be a valuable link connecting the midfield to your attackers. His pace and strength are low but he will compensate with 90+ ratings of long shots, volleys, crossing and ball control. He is a must-buy for your Premier League FUT starter team. And if you have got his Ones to Watch card then it’s an absolute beast.

The former Ajax midfielder hasn’t been fully fit yet to start a game for Chelsea but there’s no doubt about his quality. He has great passing so you can give inch-perfect through balls using him and use your forwards to run behind the defenders and score magnificent goals.

The Wolves winger is the second-fastest player in the whole game, only behind Mbappe. Traore can make daunting runs and with his dribbling skills can leave defenders behind at will. He can be used to make runs down the right flank and cross it to Rodrigo who also has blistering pace. Both of them are of Spanish origin so they will form a great partnership.

The newly signed Leeds United striker has the second-highest pace among the Premier League strikers, only behind Aubameyang. He can get make runs behind the defenders and once he is through there’s no stopping him. He will also form a green link with your RW Adama Traore.

The Spurs winger is pretty quick and has great dribbling. You can use him to come short and cut inside to dribble past the midfielders and burst into spaces. Coming at just 4,000 coins he is a great buy.

So, here we come to an end for the Premier League FUT starter team for 100,000 coins. We’ll be making more FUT teams for different coins ranges, so keep an eye here.