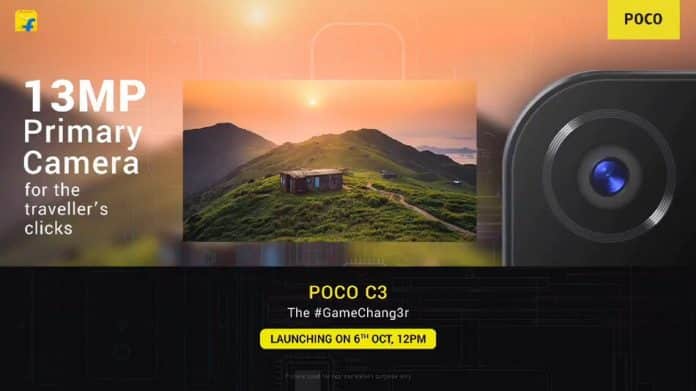 According to reports, Poco (sub-brand of Xiaomi) is going to launch its new Poco C3 on October 6 this year. It’s only 3 days prior to the launch, the rear camera setup of the Poco C3 has been detailed by the company itself through its twitter handle. There is already a ‘coming soon’ listing of this phone on Flipkart.

The company has accidentally revealed the pricing of the smartphone along with some other key specs and the design has also been revealed. According to the company, the phone will be priced under INR 10,000 in India with a powerful processor compatible with gaming as well.

According to the details revealed by Poco, the Poco C3 will sport a triple rear camera setup on the back housed inside a squircle-shaped module together with the LED flash. This rear camera module includes a 13MP primary sensor joined by a macro and a depth sensor. The triple camera setup has the Poco branding underneath.

As of now, Poco hasn’t revealed any other specifications of this phone. But it is said in the media that the upcoming Poco C3 will be the rebranded version of the Redmi 9C.

If we want to discuss this phone’s specs, then we can take the Redmi 9C, as the Poco C3 will be a rebranded version of it (probably). The Redmi 9C runs on the Android 10 OS and is powered by the octa-core MediaTek Helio G35 SoC paired with up to 4GB of RAM. Regarding the display, this phone offers a 6.53-inch HD+ display. This phone also comes with a rear-mounted fingerprint sensor and support AI face unlock.

In terms of camera, the Redmi 9C features a triple rear camera setup on its back which includes a 13MP primary, 2MP macro, and 2MP depth sensor. For the selfies, this phone offers a notched 5MP selfie snapper at the front. Regarding the battery, this phone is fueled by a 5,000mAH battery with the support of 18W fast charging. Apart from it, this phone has every other connectivity options, like a 3.5mm audio jack, 4G LTE, Wi-Fi, and Micro-USB port for charging.

Previous articleTorreira to be loaned out to Atletico Madrid; Partey to stay
Next articleBayern Munich chasing Chelsea winger Callum Hudson-Odoi