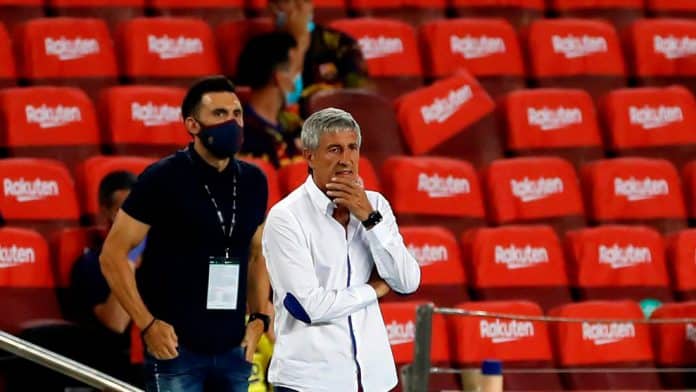 The Catalans failed to defend their LaLiga title and on top of that lost to Osasuna by 2-1 on Thursday. Club captain Lionel Messi has called for big changes at Barcelona in order to find their way back to title-winning ways.

Barcelona manager Quique Setien chose a young side yesterday with Suarez on the bench and Griezmann not even in the matchday squad. It seemed he has given up on the LaLiga title even before the match started.

Setien said after the loss: “We have been far superior to Osasuna. The fact they scored two goals is excessive.”

“The sensations are full of sadness and frustration. The defeat is unfair, but losing La Liga isn’t because we dropped points that we should have won.”

Setien replied: “Will I be the coach for the Champions League? I hope so but I don’t know… I agree with some things that Messi said. We need to be self-critical and improve.”

“Losing against Napoli if we play like this? We’ve had 10 corners, if we score one, the result would have been different. There are things we have to improve, but there are also things we have done well.”

“After Alaves we will have a few days off, the team will come rested and we must face the Champions League in the best possible way, improving what we have done wrong. Self-criticism must come from everyone. I’m the most responsible. I am convinced that we will be a different team, with a maximum attitude and that we will face the Champions League with a positive mindset.”

Hopefully, Barcelona will find their rhythm back and put up a good challenge for the Champions League trophy.