Do you know why a Barcelona fan is called an ‘arse’? 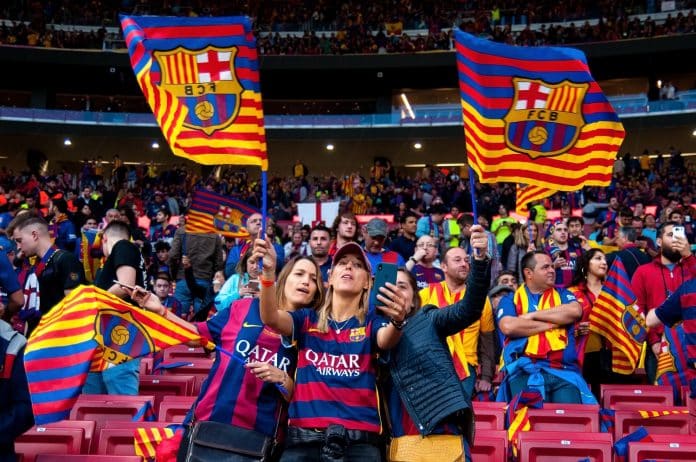 LaLiga giants FC Barcelona is one of the most popular and successful football clubs. They enjoy a huge fanbase which spreads across the whole world. Barcelona captain Lionel Messi is currently the main reason behind their such a large worldwide fanbase.

Are you a die-hard Barcelona fan? Do you take pride in the Blaugrana colours? So here’s a few questions for you.

Do you know the Barcelona fans are called the arses and the reason behind it? What is the meaning of the word ‘La Masia’ – the name of Barcelona’s famed youth academy? Or why is Barcelona called ‘Mes Que Un Club’?

If you don’t know any one of these, don’t worry. We have got you covered!

If you are a Barcelona fan, do not get offended if you are called an ‘arse’ and here’s the reason!

Probably, not many of you would take pride being called an ‘arse’ for being a Barcelona fan. This nickname for the Barcelona supporters was formed during Barcelona’s early days. Before 1957, Barcelona used to play in their old stadium in the Les Corts region of Barcelona.

The stadium was not big enough and the stands were overcrowded during the big matches. So many of the fans would sit on top of the wall surrounding the ground. For an outsider going past the stadium, they could only see the fans’ back and hence the infamous name ‘arse’ came into existence.

The literal meaning of ‘La Masia’!

The word ‘La Masia’ means ‘the farmhouse’. Barcelona’s youth academy has really been the farmhouse for producing world-class talents for many years. Six-time Ballon d’Or winner Lionel Messi is a product of La Masia.

In 2010, La Masia created a record. It became the first youth academy to produce all the three finalists for that year’s Ballon d’Or. Lionel Messi won the prize beating Xavi Hernandez and Andres Iniesta.

‘Mes Que Un Club’ translates to ‘more than a club’ in English. Barcelona has around 150,000 fans known as ‘socis’. They vote in the presidential election of the club and other matters. The club is one of the very few democratic clubs still left. Barcelona is literally run by the fans that’s why it is called ‘more than a club’.

And, at last here’s some more trivia facts for you!

Barcelona is the only European club to win a treble of the domestic league, domestic cup and European cup more than once. They did it under Pep Guardiola in the 2008-09 season and again repeated the feat in 2014-15 season under Luis Enrique.

Barcelona’s stadium, Camp Nou has the biggest capacity among all European stadiums. Currently, it can host around 100,000 fans inside.

So, after a long gap of 3 months due to the Coronavirus pandemic, Barcelona will be back in action today against Mallorca hoping to win their third successive LaLiga title. Seeing the little magician play, will cheer up the whole football community once again.

Share
Facebook
Twitter
Pinterest
WhatsApp
Linkedin
Previous articleShoaib Akhtar on Sourav Ganguly: Ganguly is the best captain India has ever produced and the bravest batsman I have bowled to
Next articleBest Budget Intel Gaming PC under $500 in 2020