LaLiga title race: Barcelona or Real Madrid, who has a better chance of winning the 2019-20 title? 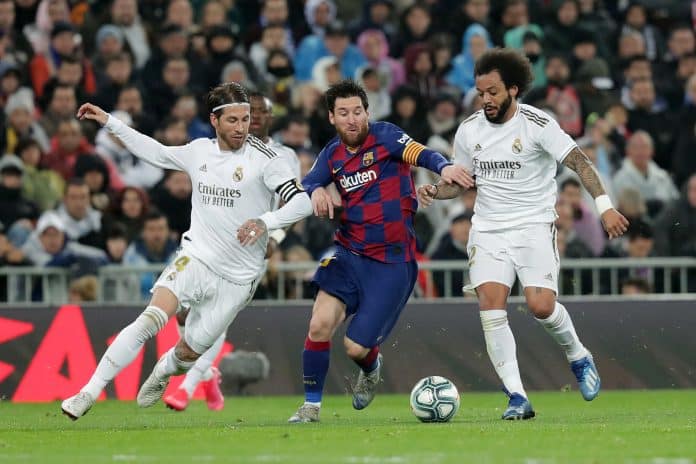 LaLiga will finally be back in action from tomorrow. These 3 months without LaLiga has been hard for football fans. The league was suspended since March due to the Coronavirus pandemic.

Spain has now somewhat been successful to eradicate COVID-19 to an extent. So the government has given the green light for the LaLiga to resume on 11th June with the Seville derby.

The LaLiga title race so far

This season’s title race has been different from the title races of the past. The current standing of the table is that Barcelona has a 2-point advantage over their bitter rivals Real Madrid. But this standing doesn’t do justice to the nail-biting title race it has been throughout the season.

Both the teams have been inconsistent throughout the season. It has been an incredible title race with Barcelona getting the nod ahead just before the Coronavirus break.

Real Madrid has just started to recover from losing their star, Cristiano Ronaldo to Juventus in 2018. They have brought in Eden Hazard from Chelsea to fill in the void. But the Belgian has spent the majority of the season sidelined by injury.

The find of this season for Real Madrid has been Uruguayan midfielder, Federico Valverde. He has turned out to be a world-class box-to-box midfielder who can defend as well as shoot and even give occasional assists. Along with Valverde, two teenage Brazilians: Vinicius Jr and Rodrygo have taken the load of Hazard’s absence. Bale has once again misfired this season or simply Zidane doesn’t trust the Welshman.

Real Madrid was arguably the better side of the two teams. They drew the first El Clasico, where they were clearly the side with better chances. They did one better in the second El Clasico of the season. They beat Barcelona by 1-0. But again their inconsistency came into play and they lost the next match to Real Betis, handing Barcelona a 2-point lead at the top of the table.

Though inferior to Real Madrid in the El Clasico, Messi has once again carried Barcelona over the line in numerous matches. The signing of Griezmann hasn’t changed their over-dependence on the little magician. The Frenchman hasn’t found his feet his Camp Nou yet. Frenkie De Jong has been brilliant at midfield, though playing as an attacking midfielder rather than his favoured central holding midfielder position.

For Barcelona, the finding of this season has been their 17-year old La Masis graduate Ansu Fati. Still very young, he has provided another dynamic to Barcelona’s attack by using the width of the pitch. Messi also believes Fati would go a long way. Barcelona has reportedly rejected a €100m bid for Fati which shows the trust they have in him.

The shape of the teams after the break

Not every footballer is Cristiano Ronaldo, who would come from a break, even fitter than before. This break can prove to be worrying for the players of both the team. Due to the long break, their fitness level has been lowered and playing so many matches in such a short span of time would increase their injury chances.

But for Barcelona’s Luis Suarez and Real Madrid’s Eden Hazard and Marco Asensio, this break has been a blessing in disguise. It seemed they didn’t have a chance to play in this season due to injuries but now as the season has been postponed they can play a big role for their teams to win the LaLiga.

Suarez will take some load off Messi’s shoulder for scoring goals. Finally, we can see Griezmann, Messi and Suarez in full swing. Hopefully, they can take Barcelona over the line.

In terms of players returning from injury, Real hold an advantage over their rivals. The duo of Hazard and Asensio can do wonders on the wing along with Vinicius and Bale. Hazard can also share the goal load with Benzema.

The clash for a top-four finish

Barcelona and Real Madrid are clear at the top so only two Champions League slots are up for grabs with 11 games to go. Just two points separate Sevilla in the third position and Atletico de Madrid in the sixth position, while Valencia in seventh is just three points behind Atletico. With all still to play for, the clash for a top-four finish is going to be all the more interesting as the season resumes tomorrow.

Personally, I feel Real Madrid will win this title race, just because of the depth in their squad and Barcelona’s over-dependence on Lionel Messi.

All the players will be playing 11 matches in just 39 days. Hence, LaLiga has allowed 5 substitutions in a game to lower the risk of player injuries and here lies the advantage for Zidane’s men.

Zinedine Zidane may not be the best tactical coach but his man-management skill is second to none. Zidane’s man-management along with Real Madrid’s depth in the squad can prove to be a deadly combo.

Meanwhile, Barcelona doesn’t have a squad depth like Real Madrid. Their whole game plan is based around Lionel Messi. However magical he is, fatigue always takes a toll on the biggest of players which will increase his injury rate. Also, Barcelona passes the ball within them and sometimes wait for the opposition players to get tired and then play the killer pass. But this 5-substitution rule will change that tactic.

But, Lionel Messi has brought Barcelona out from much deeper holes. So don’t be surprised if the little magician once again wands his magic stick and take away the LaLiga title.