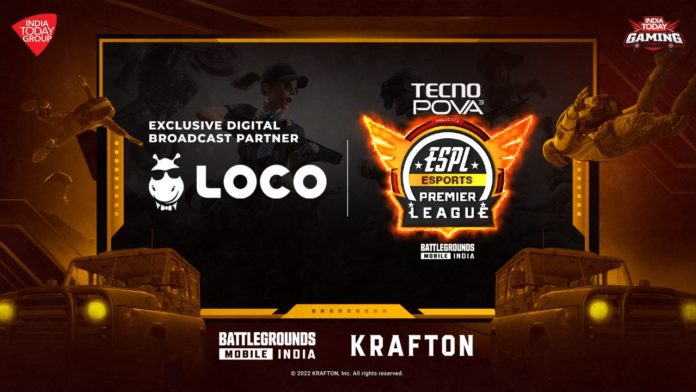 The franchise-based league will have its first-ever, offline Grand Finals via a LAN event

All matches of the second season will be live-streamed exclusively on Loco’s app and website (loco.gg).

Esports Premier League has already roped in global premium smartphone brand, TECNO Mobile as its presenting sponsor for the second edition of the country’s first franchise-based esports league. TECNO Mobile plans to promote its upcoming smartphone phone, TECNO Pova 3 through this league. The poised-to-launch smartphone will give a class-apart gaming experience to the users. It not only offers a super-fast processing speed but also comes with a massive battery.

This year’s league is set to engage esports athletes across the country in a high-voltage action of the most popular battle royale game, ‘BATTLEGROUNDS MOBILE INDIA (BGMI)’ and carries a massive prize pool of Rs. 1 crore.

Talking about the announcement of the league’s association with Loco, ESPL Director Vishwalok Nath said: “With shared values and a compelling gaming proposition, we are super excited to team up with India’s leading gaming streaming platform Loco.”

“We are pleased to be working together with the team to create interesting and engaging content for the esports fans and the community out there. We are always keen to associate with brands that share the same passion for esports as us and are looking forward to a fruitful association.”

According to a recent FICCI-EY media and entertainment report 2022, content creation and concurrent viewership around gaming saw a massive surge in India and there is also a meteoric rise in esports viewership, from 600,000 hours in 2020 to 2 million hours in 2021.

Commenting on the partnership, Ashwin Suresh, Founder, Loco, said, “Loco will play a pivotal role in growing the fanbase for ESPL and providing yet another entertaining experience for the Indian gaming community. As the exclusive broadcast partner for the league, we will provide fans with tons of exclusive content and a chance to interact with their favourite streamers. We’re excited to partner with the India Today Group on this landmark esports league as we continue to actively support the growth of the esports ecosystem in India.”

Highly active users spend over one hour daily on Loco, making it the gaming community’s platform of choice for a seamless streaming and highly engaging fan experience.

Previous articleFoxconn meets with a delegation from Maharashtra and considers investing in consumer electronics
Next articleRanveer vs Wild: Netflix’s new trailer reveals