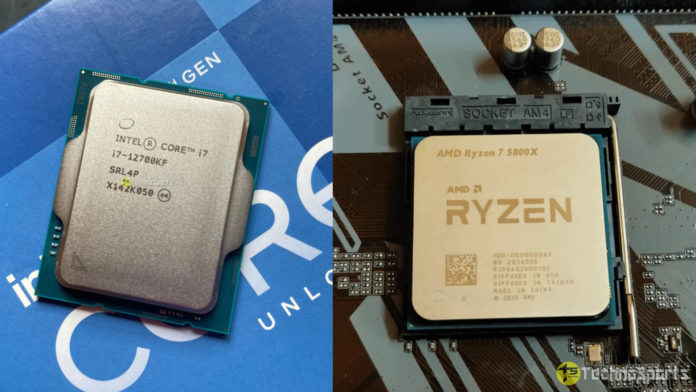 If you are someone who is desperate in making a new Gaming or Productivity PC and need advice on one of the most crucial decisions of your life, yes it’s choosing the right CPU for your PC. There are a lot of them in the market but generally, the Core i9s or Ryzen 9s are generally very costly and do not provide the best price-to-performance ratio.

Off late, the Core i7s and Ryzen 7s have better value for the offering as they are good not only for gaming but also for intense productivity workloads. If this article was one year ago, I wouldn’t have made this comparison anyways, however, as AMD was the clear winner overthrowing Intel’s 10th Gen offering.

Even Intel’s 11th Gen was a disaster for high-end chips but the budget Core i3s or Core i5s were valued for money. So, when 12th Gen Alder Lake processors came out with promise for huge improvements over last-gen we had to try them out, we already did a detailed review of the Intel Core i7-12700KF and here we will do a comparison against the Ryzen 7 5800X.

So, this time around you have two similarly priced processors retailing for around Rs.35k, the Intel chip has a better product on paper but is it worth buying over the Ryzen 7 5800X, let’s find out:

It was a year ago when we thought Intel would never be able to beat AMD in multi-core performance aka for productivity workloads that demand more multithreaded horsepower. Now, with 12th Gen Intel processors on board, things have rapidly changed and Intel significantly boosted the number of the core offerings.

So, its 12th Gen Core i7 processors boast up to 12 cores and 20 threads which is a significant boost without any hassle for Intel while successfully bringing 10nm based CPUs in the market finally! However, AMD with its more efficient 7nm process still holds a considerable value as the platform costs for making an AMD PC build is considerably low.

The main reason why the Ryzen 9s got insanely popular was because of its huge multi-threaded performance and while we knew the new Core i7s would sport 12 cores but we thought it would be comparable to the Ryzen 7s, completely underestimating the Efficiency cores.

However, as I said in my full Intel Core i7-12700KF review, these new-age i7s are monstrous in terms of multi-core performance and are widely available in the market. As I remember when Ryzen 5000 series were launched we saw price hikes, shortages, scalping and whatnot, but, this is not the case with these new Alder Lake processors.

Today, you can get the Core i7-12700KF for Rs.35k, Core i7-12700K for Rs.39k and the more affordable Core i7-12700F for only Rs.30k, all of them sporting 12 cores and 20 threads. This is insane in terms of productivity performance standpoint and well, the benchmarks speak for themselves:

In single-core performance, you see absolute dominance of Intel with great scores across all benchmarks, comfortably beating the AMD CPUs. In multi-core, you can see, the Core i7-12700KF single-handedly demolished the Ryzen 7 5800X, about 50% faster in Geekbench without even overclocking.

So, undoubtedly, you see the new Intel CPU has tremendous value compared to its predecessors and against AMD processors as well. However, you do have to note that the platform costs of 12th Gen Alder Lake are higher over AMD’s Ryzen 5000 series though bringing features like PCIe Gen 5 and DDR5 RAM support, essential for future sustainability.

As you see Intel has a strong single-core performance and that naturally means you should have better numbers while gaming if you use an Intel CPU and that’s exactly what has happened. The Intel Core i7-12700KF totally demolished the Ryzen 7 5800X and gives results that are similar to last year’s gaming champion Ryzen 9 5900X or even better than it.

In every over the game you will see clear domination of Intel over AMD by huge margins at 1440p and by some at 4K, overall, be ready to get better numbers with Intel if you are ready to spend more on the platform side. Also, the newer DDR5 RAM does play a small difference, however, if you want to spend more and need the absolute best gaming performance this Intel Core i7-12700KF is the best option out there for the price.

So, it’s clear that Intel has made a solid comeback and has made a wide number of CPUs available in the market with attractive prices. In less than two months of launch, the 12th Gen SKU prices have fallen quite a bit and as both Ryzen 7 5800X and Core i7-12700KF have the same price it makes no sense to go for a slower CPU.

I didn’t expect that I would prefer Intel, even it’s still not efficient as AMD’s, but yes thanks to its really strong comeback and great performance numbers, opting for these Alder Lake processors and the new LGA1700 socket will be a good move for the long run. Though be ready to spend more on the motherboard or RAM, however, upgradability options are better on Intel’s platform.