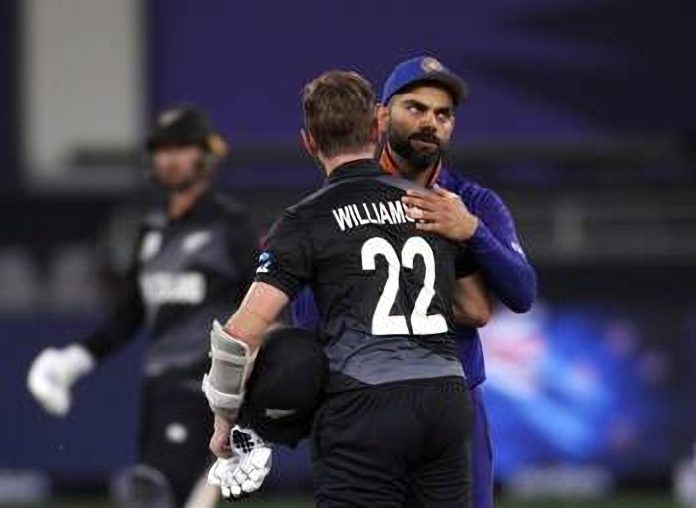 All the cricket fans around the world were expecting a close contest between India and New Zealand. Owing to the fact that both the teams were coming off a loss in their first T20 World Cup game.

However, it was New Zealand who stepped up on this big occasion as they displayed a terrific overall performance to win against India. The Blackcaps outclassed this Indian side in every department today.

Getting into the details of the match, India made two changes as Shardul Thakur replaced Bhuvneshwar Kumar. Meanwhile, Ishan Kishan came in place for an injured Suryakumar Yadav. Consequently, the Men in Blue’s bad luck with the toss continued as the Williamson won toss and elected to field first.

Interestingly, Virat Kohli and the Indian think tank decided to promote Ishan Kishan at the top of the order along with KL Rahul. However, this move failed miserably as Ishan Kishan was dismissed cheaply by Boult in the third over.

Subsequently, in a span of few overs KL Rahul and Rohit Sharma departed and India were in a big spot of bother. India’s early collapse looked extremely similar to the one against Pakistan and all hopes lied on the Indian captain once again.

Although Virat was unable to replicate his form in the last innings as he threw away his wicket to Sodhi while accelerating the scoreboard. Thereafter the New Zealand bowlers bowled a tight line and cramped the Indian batsmen. Hardik Pandya and Ravindra Jadeja added some runs to help India cross the 100 mark and set a target of 111.

After a poor batting performance, India needed a miraculous bowling display to defend 111 in 20 overs. However, the New Zealand batsman didn’t give any chance to the Indian bowlers throughout the game.

Even though Guptill was dismissed at 20, Mitchell along with captain Kane Williamson built an excellent partnership.

After Guptil’s breezy start, Daryl Mitchell tookover and smashed the Men in Blue. Unlickily the Kiwi opener fell one run short of his half century as Bumrah dismissed him. However, Bumrah’s breakthrough came too late and New Zealand chased this total in 14.3 overs.

This defeat means that team India’s qualification to the knockout stage hangs by the thread. They have to depend on other results and win all their remaining games. Meanwhile, New Zealand climb up the table and are currently placed second in Group 2.

Previous article
Tottenham Hotspur in talks over the future of Nuno Espirito Santo’s future
Next article
Apple may not launch a touch-screen MacBook Pro, Executive hints new lineup is optimized for Indirect Input