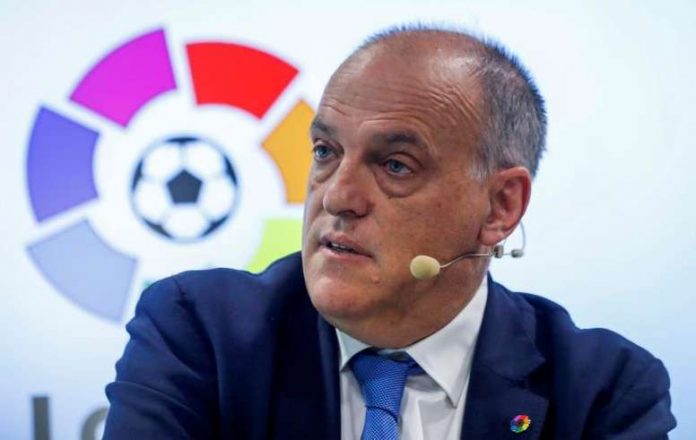 La Liga president Javier Tebas has claimed that Real Madrid have enough money to sign both Kylian Mbappe and Erling Haaland in 2022. In July, Madrid announced that they had lost €300 million due to the pandemic. However, they reported profits after tax.

‘They have sold over €200m in players. They have money in the bank to sign Mbappe and Haaland together’, Tebas is reported as saying by Football Espana when speaking at the Sporting Integrity Week event (SIGA) as the Spanish football representative.

‘They have not lost money and on top of that, they have sold assets.’

Tebas refers to the sales of Raphael Varane and Martin Odegaard when he mentions the funds accumulated in player sales. This summer, Real Madrid made three bids for Kylian Mbappe although he had only one year remaining on his current contract.

The bids were worth €160 million, €180 million and €200 million respectively. However, PSG rejected all three of the offers, instead trying to make Mbappe stay further by negotiating a new deal with the French forward. Tebas further went on to talk about PSG and how the FFP model has failed.

‘It is failure in the control rules of France, which has now hurt the European market.’

Mbappe will be available as a free agent next summer, and will be able to join Real Madrid for free. Erling Haaland, on the other hand, has a €75 million release clause that will become valid in 2022. The Norwegian has been strongly linked with a switch to the Bernabeu and could complete his transfer next year.

Previous articleReliance Jio may soon be planning to release its Jio Notebook in the market
Next articleFIFA 22: Real Madrid release ratings for all their squad players