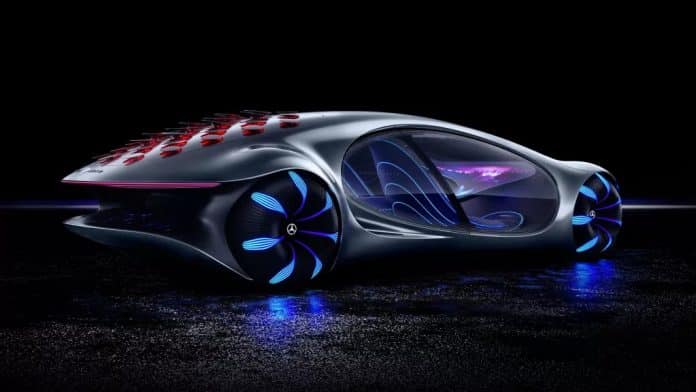 Self-driving technology has been gaining much attraction lately; in 2021, we cannot even dismiss the idea of flying cars, as we are closer than ever to witnessing them turn into a reality.

Mercedes-Benz is the latest automobile icon to introduce a mind-boggling concept through its Vision AVTR concept car, one that it defines as a living creature that forms a physical and mental connection with its driver.

Influenced by James Cameron’s Avatar, the Mercedes-Benz AVTR forms a biometric connection with its driver.

The car uses biometrics to identify its owner. However, this is not an entirely new concept as Hyundai introduced a fingerprint scanner in its Santa Fe SUV in 2018, allowing users to start the engine with their fingerprint.

The AVTR takes it to the next level; a driver needs to place their hand on the centre console, which will power up the vehicle upon recognizing their breathing and heartbeat patterns!

Mercedes revealed the AVTR at CES 2020. At the IAA Mobility 2021 show in Munich, Germany, the car is shown off with a new trick; mind control.

As reported by TechRadar, users must wear a BCI device with wearable electrodes on the back of their heads, which turns their thoughts into action. It takes “a short calibration process of around one minute.” after which drivers can perform certain functions without physical movement.

Rather than just thinking about something to make it happen, users need to focus on light points on the digital dashboard. The system recognizes which one is being looked at, triggering a preset function.

“The BCI device measures the neuronal activity at the cortex in real-time. It analyses the measured brain waves and recognizes on which light points the user directs their focus and full attention (attention-sensing interface),” said Mercedes.

“The stronger the focus, the higher the neuronal activity. The device then triggers the targeted function in the vehicle.”

As this is an autonomous vehicle, naturally, it could be possible to select preset destinations using just your mind (your eyes, to be specific), and moving through music tracks would no longer require the arduous task of stretching out one’s arm to touch a button, or using something as tiring as voice control.

Mercedes previously revealed that its car features a 110-kilowatt-hour electric motor capable of producing 469 horsepower. It also has an awe-inspiring range of roughly 435 miles. The graphene-based battery is compostable and completely recyclable, making it eco-friendly. The AVTR also features a vegan leather interior, which is made from recyclable materials, the best of all, it can move diagonally and sideways in addition to forwards and backwards. This makes parking a lot easier, and fans of RGB lighting will love the presence of all exterior LEDs.

As with any concept, the Mercedes-Benz Vision AVTR will not be here anytime soon but will hopefully arrive before Avatar 5’s scheduled 2028 release.

Previous articleFranck Ribery has been officially presented as the new Salernitana player
Next articleAcer Swift X with up to Ryzen 7 5800U & RTX 3050Ti launched in India, starts at ₹84,999

With high silicon automobile batteries, Mercedes-Benz and Sila have made significant progress

Mercedes-Benz aims to go electric-only by 2030