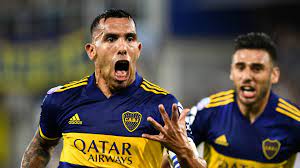 Carlos Tevez has publicly announced that he’ll be leaving Boca Juniors as he wasn’t able to have enough time to himself post his father’s demise.

Carlos Tevez was formerly a part of few reputed European teams and having taste fair amount of success in Europe, His first stint with Boca Juniors was back in 2001 till 2004 following which he signed for Brazilian side Corinthians and captained the side in 2005 leading them to Campeonato Brasileiro.

He was also named player of the season of the Campeonato Brasileiro and was the first Argentinian since 1976 to achieve this feat.

Following which he decided to join Premier League side, West Ham, along with national teammate Javier Mascherano in 2006.

And now is looking for a move from the Argentinian side for the third time.

He has stated that he is “physically fit to continue but not mentally.”

He thanked the club and fans and left the option open for an offer to continue playing elsewhere.

Edinson Cavani still in negotiations to stay at Manchester United