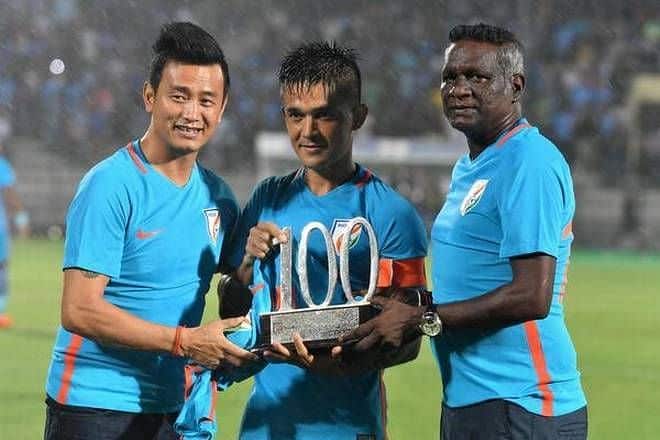 Football is still a sport that is on a rise in India, with it still finding its feet among the public, though in recent times it has grown exponentially. The emergence of the Indian Super League (ISL) has had a big role to play in Indian football’s rise. What the country might need more now are footballing superstars who can pull youngsters into the game and inspire. Here, we take a look at some of the superstars who have scored the most goals for the Indian national football team.

The current captain of the Indian national team, Sunil Chhetri, also captains his ISL side Bengaluru FC. An inspiration for every young footballer at this time, Chhetri is arguably the biggest footballing superstar to come from India. A lethal finisher, he has already netted 72 goals in 115 games and will definitely add more to his tally in the near future. He is also the most-capped Indian player.

Born in Secunderabad, Chhetri is second on the list of the highest number of goals scored in international matches among active male players after Cristiano Ronaldo and sixth on the all-time list. Coming from a country like India, which is nowhere to be found in the top 100 ranked FIFA nations, is a huge achievement in itself.

A footballing legend, Inivalappil Mani Vijayan, popularly known as Kalo Harin (Black Buck), is one of the finest footballers to come from India. He was the captain of the national team and was a prolific striker throughout his career as seen by the 29 goals he scored in 66 games.

IM Vijayan formed a successful attacking partnership with a player just next on our list, Bhaichung Bhutia, for the Indian national team in the late nineties and early 2000s. The 51-year-old won the AIFF Player of the Year award thrice (1993, 1997, and 1999), while also being bestowed with the Arjuna Award in 2003.

Such a talented player in his prime that he attracted interest from the clubs in Malaysia and Thailand, although he spent his entire career in India until retirement. Since retiring from international football, Vijayan has set up a football academy to train young players in his hometown in Kerala.

Born in Tinkitam, Sikkim in 1976, Bhaichung Bhutia was described by IM Vijayan as “God’s gift to Indian Football”. Bhutia can be described as India’s first football superstar, earning immense respect and accolades for his hard work in Indian football. The 44-year-old won numerous honors during his career including two AIFF Player of the Year awards, the 1998 Arjuna Award, and the 2008 Padma Shri.

Bhutia has many Indian football records to his name including when he joined English club Bury in 1999, he became the first Indian footballer to sign a contract with a European club and only the second to play professionally in Europe. His achievements with the national team include Nehru Cup, LG Cup, SAFF Championship three times, and the AFC Challenge Cup. One of the most memorable moments of his career came after his retirement, when the India national team played a farewell match for him on 10 January 2012 against a star-studded Bayern Munich side at the Jawaharlal Nehru Stadium, Delhi.

Jeje Lalpekhlua is one of the unsung heroes of the Indian national football team. He has been a huge influence in many victories including India’s 2011 and 2015 SAFF Cup wins but his name has never come up as a superstar footballer. He has fallen out of favour off late in the national team, however, he has scored 23 goals so far and at 30-years-old, he still has time to add to his tally.

Jeje is the second-highest Indian goalscorer in the ISL since its inception. In 2015, he won the I-league with Mohun Bagan and the ISL with Chennaiyin FC and was subsequently named the FPAI Football Player of the Year. It will be interesting to see how his career pans out as he comes to the twilight of his career.

Prolific at both international and club level, Shabbir Ali was widely hailed as the best Indian footballer in the 1970s and 1980s. The 65-year-old, who currently manages Southern Samity (a Calcutta Football League Premier Division A club), scored 23 goals during his career. Post-retirement, he has managed some top I-League clubs including Churchill Brothers and Mohammedan.

In 2011, Ali was awarded India’s highest sporting honor, the Dhyan Chand Award – becoming the only footballer to do so.