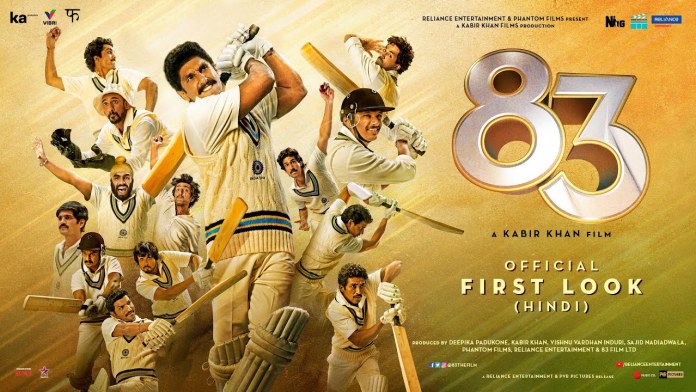 Finally, the wait is over for the biopic of the legendary cricketer Kapil Dev. After much controversy, Ranveer Singh has finally announced the release date of ’83’. For cricket lovers, this is one of the much-awaited films that has been directed by Kabir Khan. This film is going to hit on the silver screen on June 4, 2021.

The stunning ‘Gully Boy’ actor Ranveer Singh has shared a poster of ‘83’ and also has shared the release date of the film. He also has told that the upcoming sports drama is going to release in five different languages.

Ranveer Singh has shared the poster along with the caption that June 4th, 2021 !!!! in Hindi, Tamil, Telugu, Kannada, and Malayalam. He also had said that see you in cinemas. As we know there is a huge fan base of this incredible man so the fans have filled the comment box with their messages. It is like that the audience is just holding their emotions in control for the announcement of the “Padmaavat” star’s release date.

It has also been seen that Huma Qureshi, Maanvi Gagaroo, Saiyami Kher, Vivan Bathena, and also other celebs have dropped comments on the post. Vivan commented with an exclamation that finally where Saiyami has written so excitedly.

The biography film ’83’ is based on India’s 1983 great Cricket World Cup victory which was slated originally to launch on the silver screens on April 10, 2020. The release date of this film had been postponed by the makers due to the COVID-19 pandemic crisis. Before this announcement, some speculations also were a rise that ’83’ will going to release in December 2020, but after some days the rumours stopped because the producer was not said a single word about this.