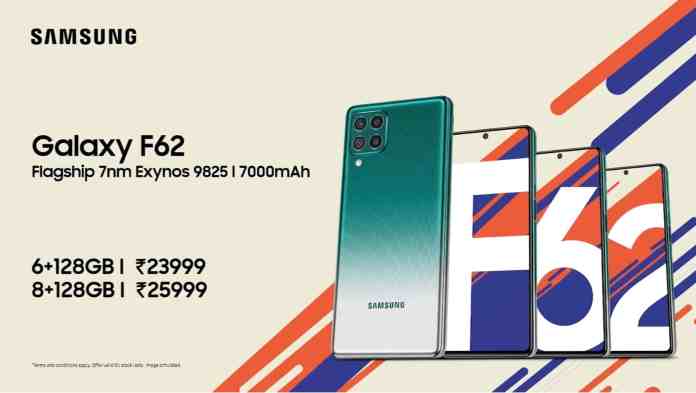 Samsung has finally launched its so-called “speedy” mid-range smartphone in India, named the Samsung Galaxy F62. It is the second smartphone from Samsung of its F-series, the first one was the Galaxy F41. So, without any wastage of time, let’s checkout its specifications and pricing.

Samsung Galaxy F62 runs OneUI 3.0 based on the Android 11 OS and is powered by the former flagship processor of Samsung, the Exynos 9825 SoC chipset. Regarding the display, this phone offers a bigger 6.7-inch FHD+ AMOLED panel with a centered punch-hole for the selfie camera. This phone has a side-mounted fingerprint scanner.

The Exynos 9825 SoC of this phone is paired with 6GB/8GB of RAM and 128GB of internal storage (Hybrid-SIM slot). Coming to the camera section, this phone offers a square-shaped quad rear camera setup (supported by an LED flash) that includes a 64MP primary sensor, a 12MP ultra-wide sensor, a 5MP macro, and a 5MP depth sensor. For selfies, this phone offers a 32MP selfie snapper at the front.

The Samsung Galaxy F62 is fueled up by a massive 7,000mAh battery supported by 25 W of fast charging. In terms of connectivity, this phone has almost everything, such as WiFi, Bluetooth, USB-C port for charging, and so on. This phone is available in three different color variants: Laser Blue, Laser Green, and Laser Grey.