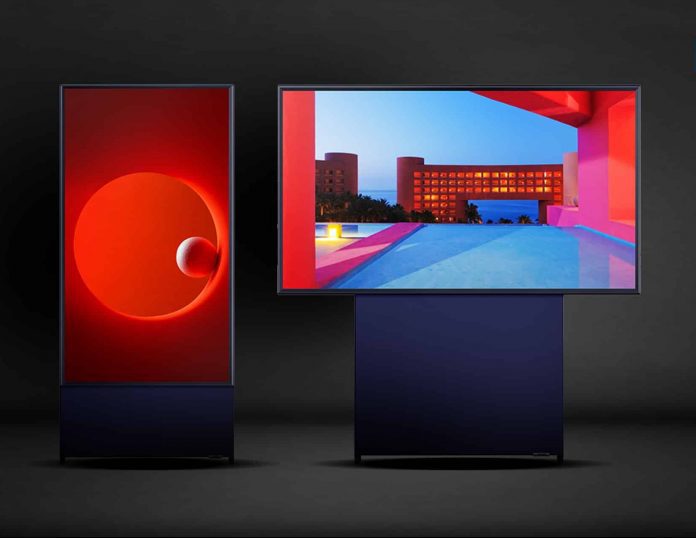 The South Korean giant Samsung has launched a rotating TV in India- Samsung Sero Rotating 4K QLED TV. It is a unique rotating TV, that can be used both horizontally and vertically. Initially, this TV has been launched in South Korea last year, now the company has launched it in the Indian market.

According to the Korean language, ‘Sero’ means ‘vertical’. This TV is a unique 4K QLED television that comes attached to a stand that allows it to rotate from a traditional horizontally oriented viewing position to a vertically oriented one. Let’s check out the specifications of this television.

This TV has a 43-inches single display with an ultra-HD QLED screen with (3840×2160) pixels screen resolution. This TV also supports up to the HDR10+ format. Users can use the screen of this TV for social media consumption on vertically scrolling Apps such as Facebook, Instagram that are typically geared for the vertical orientation of the smartphone screen. The user also used this TV screen to see the portrait videos which is captured by portrait orientation through smartphones.

The signature feature of this TV is to switch the orientation of the screen. Regarding the other features, this TV has a 4.1 channel front-firing audio system that offers 60W sound output. This TV runs on Tizen based operating system. Apple AirPlay 2, Bixby, and Amazon Alexa are also supported on Samsung Sero TV.

Regarding the pricing and availability, the Samsung Sero TV will set to be priced at Rs. 1,24,990, which is quite high for a 43-inches display. This TV will exclusively be sold through Reliance Digital Stores in India for now.