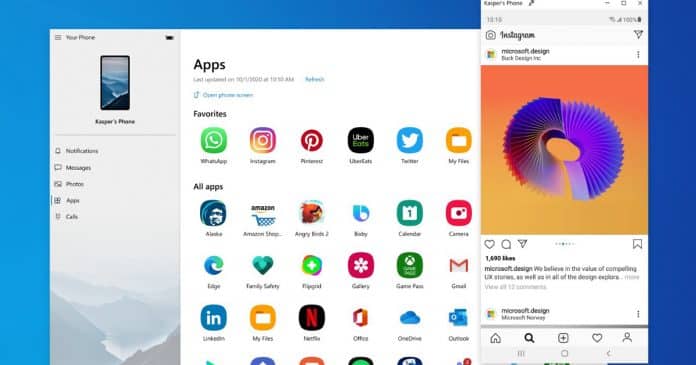 Microsoft is working on a new feature that enables running multiple android apps simultaneously. The quality is currently available only for a few Samsung devices. For Windows Insider community users in Developer, Beta, or Release Preview channels, it is also available but in beta mode.

Microsoft’s Your Phone lets users running Windows 10 access Media, Messages, Calls, and now multiple Apps as well. The feature uses a Wi-Fi connection between PC and Mobile phone, the software allows you to stream apps on PC through Your Phone.

The list of Samsung devices that supports Multiple App streaming features is:

The update also available to devices running One UI 3.0 beta:

According to sources, multiple-app streaming requires Windows May 2020 update or Later and a minimum of Android 10 to work. The requirements are given below:

However, Microsoft reported that this is an early preview update. Hence it will gradually roll out to all users. Also, sources claim that the update has several limitations like Sound Sync between PC and Mobile along with Mouse Input not recognized by Apps, and many more.

Since the feature is still in beta mode, bugs are to be expected. But since the stable update is yet to be released, we can expect Microsoft to fix the bugs in future updates. Also, the support is currently available to Samsung devices but will soon be extended to other OEMs.