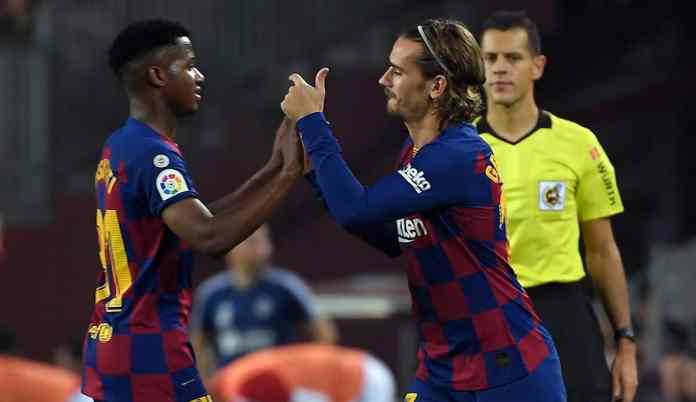 The beautiful sport of football is a medium for people to connect with and has sometimes furthered the cause of humanity which gives rise to passion and emotions in a positive manner. But what is not welcome in football, is racism and lack of education leading to unacceptable statements.

Many footballing entities have undertaken their stand of “No Racism” and have staunchly promoted this strong message so that more and more people can become aware of the issue. But regardless, incidents keep coming up time and again. The latest footballer to be subjected to racism is young Ansu Fati of FC Barcelona. And teammate Antoine Griezmann is winning respect and hearts on the internet today, with his stance on the situation and reaction on Twitter.

Griezmann secured a screenshot of one of Salvador Sostres’ article which contained the offensive and racist words directed towards Fati, and his post’s translated caption read “Ansu is an exceptional boy who deserves respect like any human being. No to racism and no to bad education.” This development came after the author had covered the review of the UCL group stage match between Barcelona and Ferencvaros, which ended 5-1 in the former’s favor.

Ansu Fati scored 1 goal and 2 assists in the game but was still subjected to such treatment by the writer. Barcelona’s legal services department is expected to take up this matter very seriously, and might even sue the agency and writer on relevant grounds.

Ansu Fati has certainly emerged as Barcelona’s golden boy in the last season, who is an established member of the first team now with his latest contract extension. With the likes of fellow forwards Lionel Messi and Antoine Griezmann guiding him at the starting of his top-flight career, Fati has fitted in seamlessly at the club with no incessant pressure particularly placed on his young shoulders. Fati has so far this season a tally of 4 goals in 5 games across all competitions for FC Barcelona.