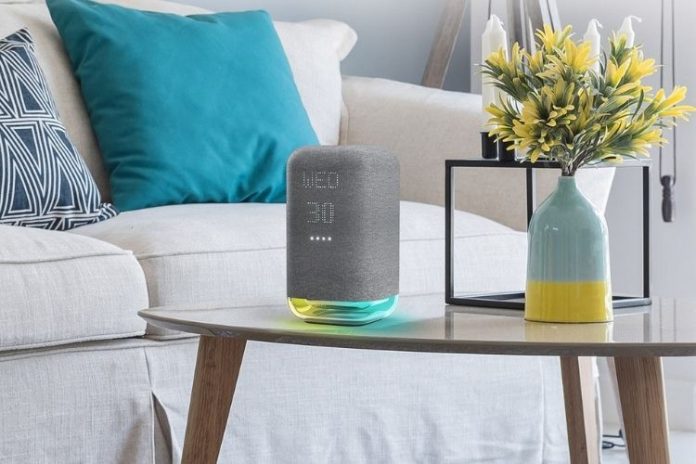 Acer has announced a series of new devices hitting the retails market in a few months. The slew of devices unveiled by the company includes laptops, desktops, beamers, display devices, and much more. Earlier, we saw the company unveiled the first-ever Chrome OS device powered by the Snapdragon 7c processor, which is aimed to deliver 14 hours of battery back that is currently out of reach for every Chromebook in the market. Not to mention, Acer has also released a new fleet of monitors in its already famous Predator and Nitro series of gaming devices.

Now, the company has announced its latest Google Assistant-equipped smart speaker device, that comes with RGB lighting and a low-res LED display.

The smart speaker, dubbed as the Halo Smart speaker is designed for homes especially equipped with Google devices. The look of the devices gives a feel of staring at a Nest Audio Speaker. The RGB offers color schemes for night and day setup. The device also comes with a physical mute and switch button, along with controls for play and pause and volume adjustments. The low-res LED display allows users to check time, view alarms, or see weather updates.

The users will be able to display a custom message or even a low-res image on the screen. Acer’s new Halo Smart speaker is turning out to be a viable alternative to the newly launched Nest Audio device. The Smart speaker’s main key advantage is its complete integration with Google devices and augmentation of Google Assistant’s answers with some additional information.

Acer announced the launch of its Halo Smart speaker starting from the First Quarter of 201. The device will start at $109 and will be first made available for the company’s North American Market.

The Halo Smart Speaker will be available in North America in Q1 2021, starting at $109. People in Europe, the Middle East, and Asia can purchase the device for €119 beginning this December.