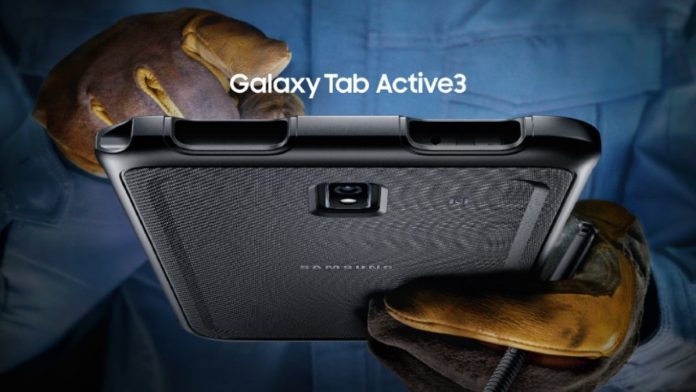 The South Korean giant Samsung has launched its Galaxy Tab Active 3. This tablet was available starting from a few days back in select countries in Europe and Asia. The availability in other countries will be announced later. Let’s check out the specifications of this tablet.

The Galaxy Tab Active 3 features an 8-inch LCD with (1920×1200) pixels of screen resolution and designed to be operated with gloves hand, but if the gloves prove too thick, then the IP68-rated S pen can be used to navigate the UI. The tablet also features a fingerprint scanner or face recognition.

This tablet comes with a rugged case that allows it to survive drops from 1.5m and without a case, it has a flat surface from 1.2m.

Regarding the camera part, this upcoming tab packs with 13 megapixels of primary camera and a 5 megapixels lens for the selfie and video call purpose.

This newly launched tablet is powered by Exynos 9810 chipset and runs on Android 10 with DeX mode for a desktop-like experience along with the security protections of Knox.

The tablet has 4GB RAM and two types of storage configurations – 64GB and 128GB. The users can expand storage through a MicroSD card.

The Galaxy Tab Active 3 is backed by a decent battery of 5,000mAh. Also, it can be charged in docks thanks to the pogo pins, or can use regular USB when available.

The slate has a ‘no battery’ mode, which can be toggled from the settings that provide a stationary kiosk without the battery damage. This tablet comes with a rugged case that allows it to survive drops from 1.5m, and without a chance, it has a flat surface from 1.2m.

This tablet will get three major OS updates-which is an important consideration for business and typically use equipment longer than consumers.

Regarding other specifications, the Galaxy Tab Active 3 will have LTE, and Wi-Fi 6 and MIMO delivers super-fast Wi-Fi connectivity and will be supported by the 4G network.