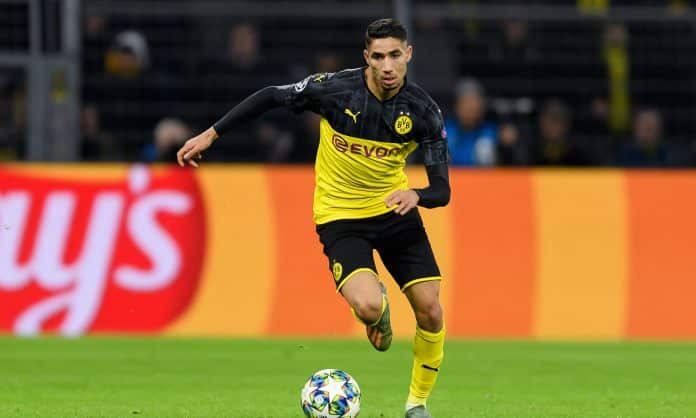 Moroccan right-back Achraf Hakimi is set to join Inter Milan from Real Madrid for a reported €50 million after spending 2 seasons on loan at Borussia Dortmund.

Hakimi was photographed arriving in Milan on Tuesday to get a medical for the Inter transfer. A report in AS said the 21-year-old is about to sign a five-year contract with Inter.

A product of Real’s academy, Hakimi made 16 appearances for their first-team in the 2017-18 season, but his long term prospects were limited from the consistency of Dani Carvajal along with the signing of Alvaro Odriozola in 2018.

Hakimi has made 45 appearances in all competitions for Dortmund this season, scoring 9 goals and providing 10 assists to help the team finish second in the Bundesliga. He has become a world-class right-wing-back at Dortmund.

Hakimi has published a farewell letter to the Dortmund fans on his Twitter account. He wrote: “The time has come to close a very beautiful stage in my life. After two wonderful years, I’m ready to leave this club that has given me so much joy.”

“From the first moment, the care and attention by the club and the city has been amazing. Now I know that I was right to choose Dortmund as my home two years ago. I want to thank all my teammates, the coaching staff, and all the club’s staff for the love and trust they have shown me at all times.”

“I also want to thank the wonderful fans who have supported us unconditionally in every game. I’ll never forget the yellow wall (Glebe Wand) which is simply wonderful.”

“Finally, I would like to thank my family and friends for supporting me at all times. I hope that one day our paths will cross again. See you soon Borussia Dortmund!”

Inter Milan have agreed on a reported €40-50 million move for Achraf Hakimi from Real Madrid. The Hakimi to Inter Milan deal is set to be finished by the end of the week as he has travelled to Milan for medical today. Even though Achraf Hakimi is bound to join the Inter Milan squad, the Moroccan star will be eligible to play for Antonio Conte only from the next season.

Hakimi was asking for the assurance of a permanent first-team role if he returned to the Bernabeu. But Zidane has trusted Dani Carvajal with the right-back role instead of Hakimi. He would have played just like Mendy plays alternately with Marcelo.

The Moroccan was not convinced with the idea and opted for a permanent transfer. His personal choice was Antonio Conte’s Inter and Real Madrid has valued his choice.

Hakimi has been used in the wings by Dortmund. Conte also plays in the same formation with three centre-backs along with two full-backs who work as wingers. This tactic will suit Hakimi very well so this transfer move is turning out to be good for all the sides involved.

Previous articleboAt Airdopes 441 TWS Ear-Buds long-term Review
Next articleBen Stokes likely to be the new captain for the upcoming test against England.