Barcelona vs Real Madrid: El Clasico has been postponed 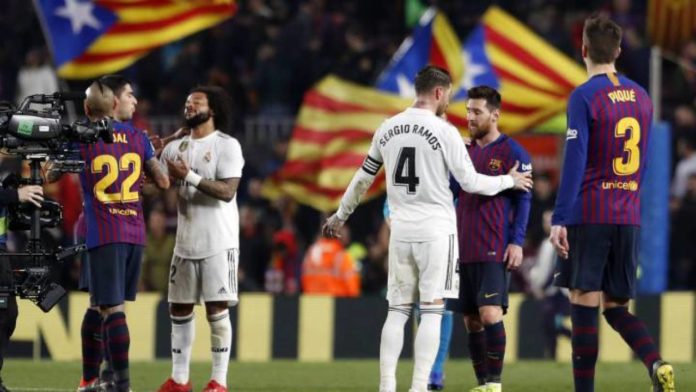 RFEF have confirmed that the El Clasico will not take place on 26th October.

The Barcelona vs Real Madrid match, popularly known as El Clasico was scheduled to be played on 26th October at the Camp Nou. But, now the match has been postponed due to the ongoing disturbances in the Catalan region in north-east Spain.

Violent protests have been taking place in the Catalan region. Spanish supreme court jailed nine Catalan separatist leaders over their roles in organising an independence referendum in 2017.

According to Goal, as of Thursday, the streets of Barcelona and surrounding areas had been hit by four consecutive days of violent clashes between protesters and security forces and a rally is planned for the city of Barcelona on 26th October – the date on which the El Clasico was scheduled to take place.

So the Spanish FA (RFEF) has confirmed that EL Clasico will definitely not take place at the Camp Nou on 26th October.

RFEF have released an official statement saying: “Gathered on an extraordinary day yesterday the RFEF Competition Committee, has resolved in relation to the National League Championship game between FC Barcelona and Real Madrid set for next October 26, after analyzing the allegations of the parties, the next:

According to Marca, both the clubs agreed that they do not want to play the first Clasico of the season at the Estadio Santiago Bernabeu and were receptive to the idea of changing the date, with everything pointing towards the match taking place on 18th December, however LaLiga were not in favour of the game being played on a Wednesday.

Instead, LaLiga suggested that the match be disputed on Saturday, 7th December, so that the match is on a weekend and does not have as big an impact on the millions of people watching around the world.

In order to do so, though, Barcelona and Real Madrid’s opponents on the 16th matchday, Real Mallorca and Espanyol respectively, would have to agree to have the fixture moved.

So now LaLiga and both the clubs have until 10:00 local time on Monday 21st October to agree on a new date between themselves. Or else, the RFEF will decide a date on their own.

Therefore, the one thing that seems clear is that Real Madrid and Barcelona will be able to rest next weekend. This means that after this weekend’s round of fixtures, they will both play in the Champions League, with Los Blancos traveling to Turkey to face Galatasaray while Barcelona will fly to the Czech Republic to take on Slavia Prague. They will not return to league action until the 11th matchday.

On the 11th matchday, Barcelona will host Real Valladolid on Tuesday, 29th October, and Real Madrid will make the short trip to Leganes on Wednesday,30th October.