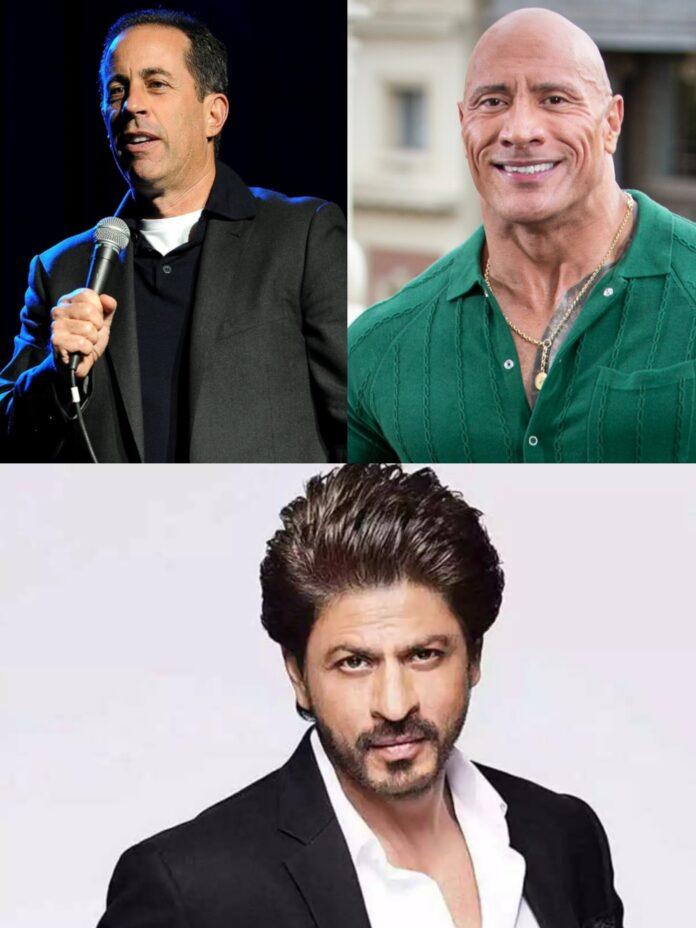 Here we present the list of the Richest actors in the World:-

Jerry Seinfeld stands first in the list of Richest actors in the World in 2023. He is an American stand-up comedian, actor, writer, and producer. He was born on 29th April 1954 and his full name is Jerome Allen Seinfeld. Jerry Seinfeld is famously known for playing a semi-fictionalized version of himself in the sitcom Seinfeld, which he created and wrote with Larry David.

Tyler Perry ranks second on the list of the Richest actors in the World in 2023 by having an equal net worth of $1 Billion as Jerry Seinfeld. He is an American filmmaker, actor, playwright, author, songwriter, entrepreneur, and philanthropist and was born on 13th September 1969. Tyler Perry is mainly known for creating and performing a tough elderly woman character named Madea.

Dwayne Johnson stands third in the list of the Richest actors in the World in 2023. He is an American actor and former professional wrestler. He is famously known as Rock as his ring name and was born on 2nd May 1972. He was one of the best wrestlers of all time, Johnson wrestled for the WWF for eight years before entering the acting life. Recently, he joined the Hollywood industry and has delivered great blockbusters movies and has become the highest-paid actor in less time.

Shah Rukh Khan becomes the 4th Richest actor in the World in 2023, He is also known by many names such as SRK, King Khan, Baadshah of Bollywood, and King of Bollywood. He was born on 2nd November 1965. SRK is an Indian actor, film producer, and television personality who works in Hindi films. He has won many awards including 14 Filmfare Awards, the Padma Shri Award by the Government of India, Ordre des Arts et des Lettres and the Legion of Honour by the Government of France.

Tom Cruise is the 5th Richest actor in the World in 2023. His original name was Thomas Cruise Mapother IV and was born on 3rd July 1962. He is one of the world’s highest-paid actors and has received many awards that include an Honorary Palme d’Or and three Golden Globe Awards, in addition to nominations for three Academy Awards. His films have grossed over $4 billion in North America and over $11.1 billion worldwide, making him one of the highest-grossing box-office stars of all time.

Jackie Chan stands 6th on the list of the Richest actors in the world in 2023. His original name is Fang Shilong and was born on 7th April 1954. He is a Hong Kong actor, filmmaker, martial artist, and stuntman known for his slapstick acrobatic fighting style, comic timing, and innovative stunts, which he typically performs himself. Chan has been acting since the 1960s, performing in more than 150 films. He is one of the most popular action film stars of all time.

George Clooney is standing at number 7 on the list of the Richest actors in the World in 2023. His full name is George Timothy Clooney and was born on 6th May 1961. He is an American actor and filmmaker. He has won many awards including a British Academy Film Award, four Golden Globe Awards, and two Academy Awards.

Robert De Niro is the 7th Richest actor in the world in 2023. Robert Anthony De Niro Jr. was born on 17th August 1943. He is an American actor Known for his collaborations with Martin Scorsese, he is considered to be one of the best actors of his generation. De Niro is the recipient of various accolades, including two Academy Awards, a Golden Globe Award, the Cecil B. DeMille Award, and a Screen Actors Guild Life Achievement Award.

Read- Pele: Net Worth after passing away