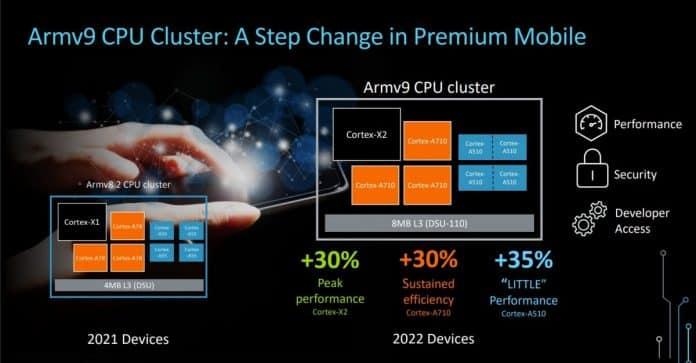 Rumors have already begun to suggest that next-gen MediaTek Dimensity flagship chipsets will be based on the new ARMv9 architecture. The most recent of these leaks claim that MediaTek could be one of the first companies to place orders with TSMC’s 4nm foundries.

As per Digital Chat Station, a reliable tipster, the Dimensity 2000 will feature one Cortex-X2 prime core clocked at 3.0GHz, three Cortex-A710 cores, and four A510 cores.

This is quite similar to the setup that we get to see on the Snapdragon 898 SoC and the Exynos 2200 that will be based on Samsung’s 4nm process.

Samsung‘s recent tie-up with AMD for GPU and Huawei surrounded by an ocean of difficulties in finding chip markers, the upcoming Dimensity 2000 will be the only chipset to use the new Mali-G710 MC10.

The G710 arrives as the successor of the G78 and is set to give a 20% boost in the speeds and 35% better performance for machine learning tasks, according to ARM’s official numbers.

However, Samsung on the other hand is expecting it to be around 30% faster than the older Mali chips that it used. The actual performance will be dictated by the clock speeds on the two 4 nm nodes.

While there were early benchmarks to give a hint at how fast the upcoming chipsets are going to be but that is not something to go by.

Waiting for devices to arrive with these chipsets will be a wiser option to measure the true speeds.

All three chips should be made official at the end of this year or in January. It would have launched by the end of this year bit owing to the shortage in the semiconductor industry, plans have now been altered. The first ARMv9 devices with the new chips could be out as early as next year.