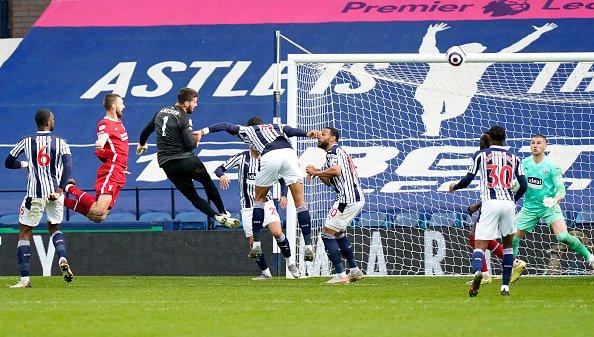 Liverpool goalkeeper Alisson Becker dedicated his injury-time winner against West Brom to his late father, who has passed away last February.

The Brazilian became the first Liverpool goalkeeper to score in the club’s history. Liverpool won 2-1 against West Brom last night. Alisson scored in the injury time from a thumping header from a corner.

After the match, Alisson becomes very emotional and said, “I’m too emotional, with everything that’s happened in my life recently with my family.”

“Football is my life, from since I remember with my father. I hope he was there watching and celebrating. That was for my family and for the boys.”

“You can’t explain a lot of things in life, the only answer for me is God, he put his hand on my head today and allowed this to happen. I’ve received incredible support recently. Other clubs like Everton, Man City, Chelsea, and of course our fans and staff at the club, and others I forget now.”- he added.

With yesterday’s goal, Alisson Becker is the sixth goalkeeper to score in the Premier League & the first to score a winner. He also kept the top 4 dreams alive for his side.

However,  Liverpool manager Jurgen Klopp confirmed yesterday that striker Diogo Jota will miss the rest of the season with a foot injury which is a big blow for the Red before the two vital games in the league.

- Advertisement -
Powered by JustWatch
Share
Facebook
Twitter
Pinterest
WhatsApp
Linkedin
Previous article
From cricketers to COVID warriors: Here are some of the notable cricketers who have stepped forward in these tough times
Next article
Qualcomm to introduce Snapdragon 778G SoC on 19th May

Top 10 most expensive signings by Liverpool in history