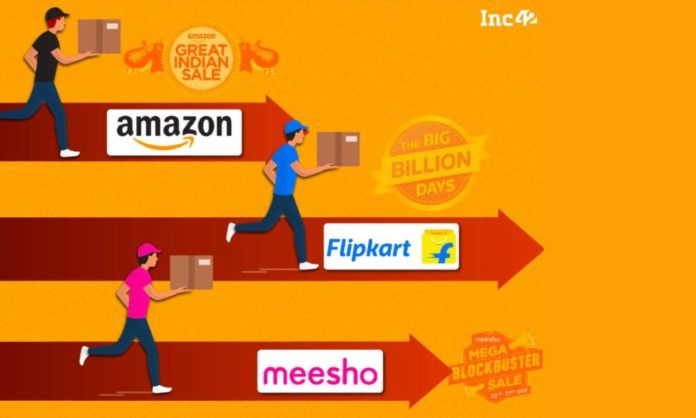 According to a research by Redseer, a strategy consulting business, Meesho emerged as the second largest, taking 21% of the market, while Flipkart was also a leader in terms of order volumes.

Online retailer Amazon India reportedly referred to the Redseer analysis on holiday season sales figures as “speculative” and “lacks transparency,” but the consultancy business defended it as independent research.

All online retail platforms held sales events between September 22 and 30 as part of the first Festive Sale week. Additionally, the analysis took into account BAU (business as usual) order volumes for platforms that did not conduct a promotion during any of these periods.

During the first week of the holiday shopping season, 75–80 million customers placed orders on various e-commerce platforms, according to the Redseer research.

During the aforementioned time period, more than 56,000 mobile phones were sold every hour. About 41% of the GMV came from mobile. 20% of the gross merchandise value, or 48% more than during the holiday season last year, came from fashion.

According to Redseer, white goods (big appliances) are anticipated to pick up steam after a slower start. Over 65% of customers came from tier 2 cities, with the number of shoppers rising by 24% year over year during the first week of sales. The amount spent by each online shopper rose by 3% as well.

Matheus Martins to join Watford through Udinese in 2023