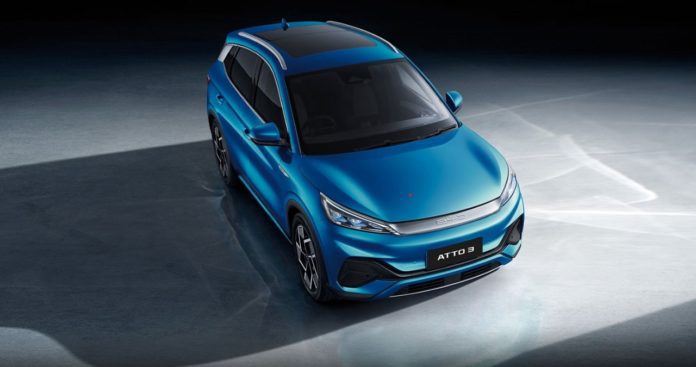 BYD (Build Your Dreams) is all set to introduce its second model in India during this festive season. The carmaker has confirmed that it will launch the BYD Atto 3 electric SUV on 11th October 2022. With the launch of Atto 3, the company is all set to enter the commercial EV market in India.

The BYD Atto 3 is the second EV from the company, and the Chinese automaker already sells the BYD e6 EV MPV in the country. Senior Vice President, BYD India, Sanjay Gopalakrishnan told that the company is planning to expand into the personal buyer’s space after receiving a great response from E6 MPV corporate customers. The new electric vehicle is Atto 3 electric SUV model, with the brand teasing some of its key specifications.

BYD is Warren Buffet’s Berkshire Hathaway-backed Chinese electric vehicle manufacturer that overtook Elon Musk’s Tesla as the world’s largest EV maker by volume in July 2022. The company sold 641,000 units in the first half of this year against 564,000 units of Tesla.

Based on the latest teaser, the Atto 3 has given us a glimpse of the car’s silhouette from the front. The Atto 3 also shows off the lighting design of the front. Talking about the specs of the EV, the Atto 3 has a motor that can output up to 201bhp of peak power and 310Nm of peak torque.

This is paired with a 60.5kWh battery pack. As per official claims, the Atto 3 has an operational range of 480 kilometers on a single full charge, taking just 1.2 hours to be fully charged thanks to an 80kW AC. The Atto 3 has been equipped with the ADAS (advanced driver assistance system) along with the tire pressure monitoring system, hill descent control, traction control system, multiple airbags, and electronic stability program.

BYD recently opened its first showroom at Okhla in New Delhi. It plans to expand its dealership network in India and Mumbai. In global markets, it’s offered in three colour options – Surf Blue, Boulder Grey and Ski White. When it comes to India, the BYD Atto 3 electric SUV will target the market space that is occupied by Hyundai Kona EV and MG Motor ZS EV. The price of the Atto 3 is expected to be around Rs 25-30 lakhs.

More images of the 2024 Ola EV Car have surfaced online