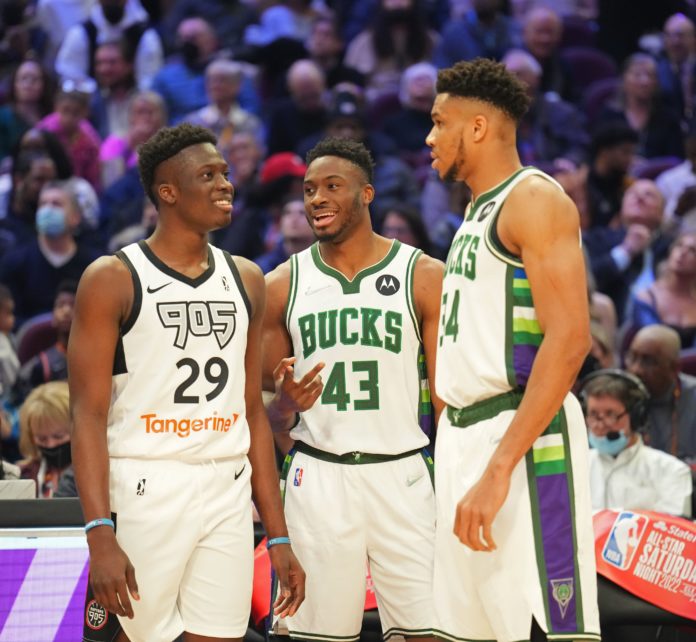 Earlier on Saturday, the 2022 All-Stars spoke with media.  Joel Embiid (Cameroon) and Giannis Antetokounmpo (Greece, ties to Nigeria) reflected on their All-Star experience this year.

“It’s a blessing. Always coming in here. Can’t ever take it for granted, so I’m trying to enjoy it as much as possible, and, obviously, having my family here and Arthur being part of it is huge for me because they’re really the reason why I’m here, and I’m doing so well, so I’m excited and it’s special for me,” said Embiid

“I’ve been in eight weekends in my career. Six as an All-Star, two as a Rising Star. In the beginning you’re excited, you’re doing everything, you do all the interviews, you are shooting extra shots on the court, but then you realize, man, you grow a little bit, you have kids. They don’t let you just sleep the night before. You realize, like, hey, you know, I have a long season ahead of me. So, I just got to enjoy this weekend as much as possible, do what makes me happy, and keep it going,” said Antetokounmpo.

In the NBA and HBCU Classic, Howard University defeated Morgan State 68-66 in a tightly contested game.

Team Durant will take on Team LeBron in the 71st NBA All-Star Game at 3:00 a.m. CAT in the early hours of tomorrow morning. The NBA will honor the 75th Anniversary Team in a special ceremony at halftime.

Read: Top 5 Basketball Players to watch out for this NBA season