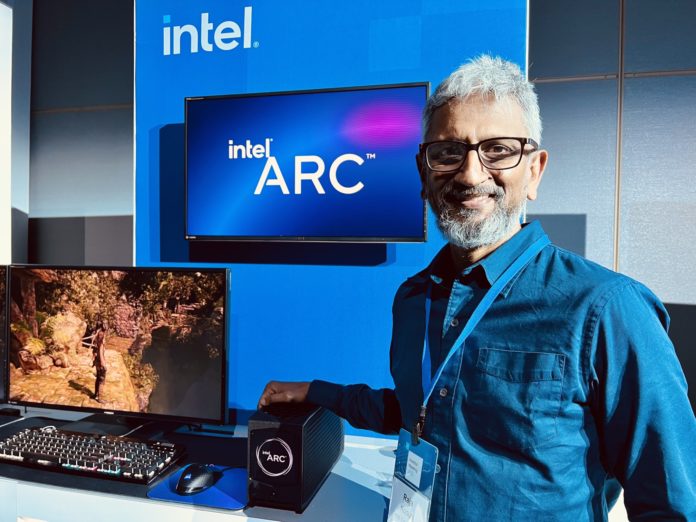 Raja Koduri of Intel teased the company’s Beast Canyon NUC, which is powered by the company’s own Arc Aclehmist discrete graphics cards. The Intel NUC Extreme ‘Beast Canyon’ is one of the most powerful SFF PCs available, with full-length graphics cards and support for desktop-grade 11th Gen Tiger Lake Desktop ‘KB’ CPUs.

Intel appears to have its discrete graphics solution, Arc Alchemist, running within prototype builds, as Raja Koduri demonstrated. Raja Koduri previously stated in a live interview that he had an early Arc Alchemist GPU running on his home PC. Raja has teased the first NUC Extreme ‘Beast Canyon’ device with their own Arc Alchemist graphics card.

The Intel NUC Extreme ‘Beast Canyon’ shell can accommodate full-length graphics cards up to 12-inches in length and includes two 8-pin power ports for the discrete graphics card. It’s a big PC, with numerous riser cards connecting the NUC 11 Compute Element AIC, which has the LGA 1200 socket for Tiger Lake CPUs, and another riser that connects to the dGPU customers want to use.

Intel has announced that desktop discrete Arc Alchemist graphics cards will be available in stores in Q2 2022, so we’ll learn more about the cards in the coming months.

Nvidia forecasts its first-quarter revenue to be around $8.1 Billion