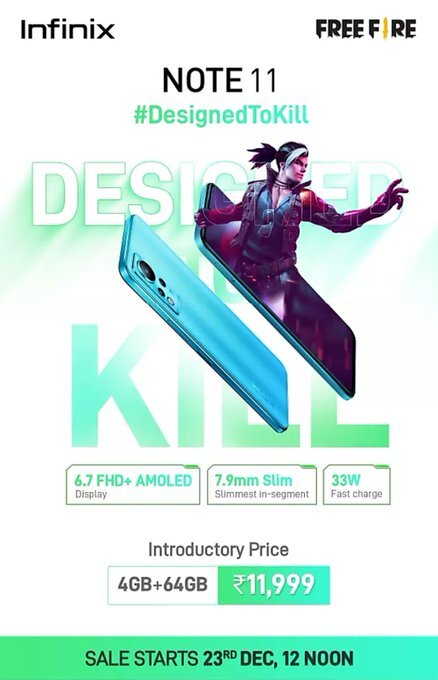 Infinix has launched the Note 11 and Note 11S earlier today in India. The smartphones are priced between 11,999 INR and 14,999 INR. Let us take a look at the detailed specs of the devices.

The Infinix Note 11 is powered by the MediaTek Helio G88 SoC chipset which is an octa-core chip. This has been paired with 4GB of RAM and 64GB of storage. You can expand the storage all the way to 512GB via a microSD card.

Coming to the camera specs, the Infinix Note 11 comes with a 50MP primary sensor with an f/1.6 aperture along with a 2MP depth sensor and an AI lens. The Note 11 has a 16MP selfie shooter with an f/2.0 aperture and a dual-LED flash.

The smartphone has a side-mounted fingerprint sensor and it is equipped with an accelerometer, an ambient light sensor, a gyroscope, magnetometer, and a proximity sensor.

The smartphone supports 4G LTE, Wi-Fi, and Bluetooth v5 connectivity. It is equipped with a USB Type-C port and has a 5,000mAh battery which supports 33W fast charging. The Infinix Note 11 has a 3.5mm headphone jack.

The Note 11 has been priced at 11,999 INR and it will come in only a single 4GB+64GB configuration. The device comes in Celestial Snow, Glacier Green, and Graphite Black color variants.

It will go on sale on the 23rd of December through Flipkart.

The Infinix Note 11S is powered by the octa-core MediaTek Helio G96 SoC, paired with 8GB RAM and 128GB UFS 2.2 storage which can be expanded to 512GB via a dedicated microSD card slot.

The Infinix Note 11S sports a triple rear camera setup, featuring a 50MP primary sensor with an f/1.6 lens, along with a 2MP depth sensor and a 2MP macro sensor. The smartphone has a 16MP selfie shooter with an f/2.0 aperture and dual-LED flash.

The Infinix Note 11S comes with a side-mounted fingerprint scanner and it has sensors such as an accelerometer, ambient light sensor, gyroscope, magnetometer, and proximity sensor.

The Infinix Note 11S comes with 4G LTE support, Wi-Fi, and Bluetooth v5 support. The Note 11S has a 5,000mAh battery with 33W fast charging support. The smartphone has a 3.5mm audio jack and a USB Type-C port.