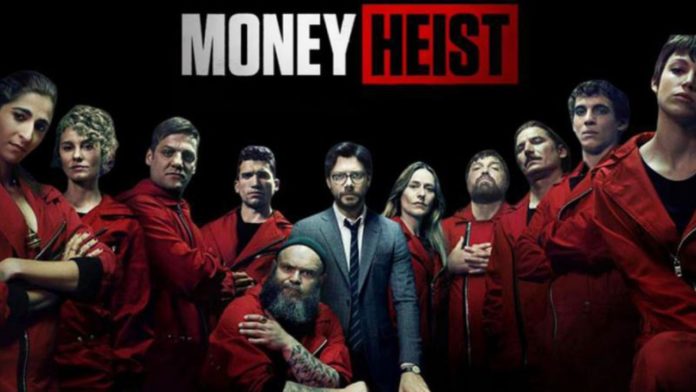 Money Heist is a Spanish heist crime drama TV series. Alex Pina creates it. It is executively produced by Alex Pina, Sonia Martinez, Jesus Colmenar, Lobato, Cristina Lopez Ferraz and Nacho Manubens. Its production companies are Atresmedia and Vancouver Media. It contains 4 seasons having 31 episodes. It has a running time of 41-59 minutes for each episode. It was firstly released on 20th December 2017. The fifth season is going to be released within a month. The head writer of season 5 is Javier Gomez Santander.

This story is based in Madrid; in the first two seasons, a mysterious man named ‘The Professor’ recruits a set of 8 people who choose city names for themselves to avoid personal sharing of life to carry out an extraordinary, brilliant, impossible, and ambitious plan of robbing The Royal Mint of Spain.

In the next two seasons, the groups are forced to come out from their nutshell to save one of their members of the heist. In this season, they prepared for a second heist, this time, it’s The Bank of Spain, and again they deal with hostages and police forces simultaneously.

Here we present the recap of Season 4:-

The new teaser of Money Heist Part 5 Volume 2 was released just 1 hour ago on the Youtube channel of Netflix. The new teaser is of 1min 52 seconds and is a mixture of the actors explaining their work experience and giving some hints about the upcoming final season of Money Heist along with some visual scenes from the new season.

The teaser started with The Professor saying that “I think this season is loaded with extreme tension”. Then the teaser presents some clips from the upcoming season showing that the gold is being in the process of melting, everyone was in an extremely tense situation. After that, we again saw Helsinki saying that something like this only once in a lifetime. This final season is going to be full of intensity, emotion, love, and everything altogether. This time nothing is going to be missed.

The teaser also shows us the clip from behind the scenes, how they were shooting the series and everything in a short glance. Lisbon has said while shooting for the series,” If the plot thickens any further, will we make it to the premiere?” which signifies that this time the series is going to be of longer duration. Further in answer, she herself has said “I think we will”.

While Palermo said that they will not let the fan’s expectations down, we would definitely love the final season. The full teaser will all in all gear up the audiences to keep the excitement up for the upcoming final season. This is finally ignited more by the words of Helsinki. He said that when he read the script of episode number 10, he himself can not believe what is going to happen.

Money heist Part 5 Volume 2 is going to be the Endgame. It seems that the audience will not go to bed after watching any of the episodes without ending it. There is the question that has also been raised by Denver itself before being asked by the audience that How do you end something this big? The only answer to this question will only be revealed on 3rd December itself.

Last but not the least, at the end of the teaser we have seen Tokyo in an interview asking that if she would reappear in a flashback, how she would like to make her comeback, does she have any wish? She said, “I should involve a lot of dancing and partying”.

Overall the teaser is literally tempting the audience and has increased the excitement level much higher than before and it seems from now onwards everyone will be eagerly waiting for its release.

Here we present the new teaser:-

The new major additions in the cast members for the fifth season that has officially been announced are as follows:-

1. Miguel Angel Silvestre- known for his role in Velvet.

“We always try to bring in charismatic, intelligent, and brilliant opponents. In this case, from a genre of pure war, we also look for characters in which intelligence can be like that of the Professor.”

Patrick Criado- known for his roles in The Aspirant, Plastic Sea, and The King.

Jose Manuel Seda- writer, director, and actor best known for his work on Yo soy Bea.

“Happy to share the wonderful gift I received on my birthday: my participation in the final season of @LaCasaDePapelTV, one of those series that when you see them, you dream of being in it. Thanks to @VancouverMed and @Netflixes.”