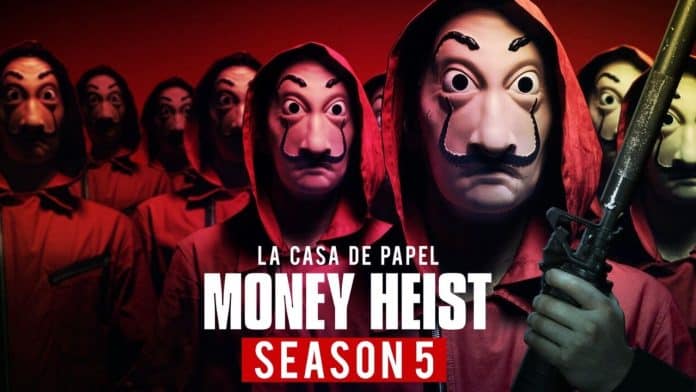 Money Heist Part 5 Volume 2 sneak peek released today i.e. 26th October 2021 by Netflix. The sneak peek of the Money Heist Part 5 Volume 2 started with Lisbon saying that The Professor was missing. Lisbon was looking tired and yet fierce, asking her fellow members that what the plan of action should be as The Professor was missing. She was then interrupted by Martin, who has dismissed her approach. He said that going with the democratic way, he would rather choose to dictate orders.

The sneak peek is of about 1minute and 41 seconds. The sneak peek shows us the confusion that has been created regarding what needs to be done with the gold as well as how all of them exist the heist safely. While Lisbon is hell-bound for safety, Martin argues that it will be foolish to go without the gold.

While the other gang members started making arguing including Denver, Monica, and Rio.

The teaser ends in a very tense moment as the conflict has become clear and at the end, Martin has pointed his gun at each member who has spoken against his idea.

Here we present the Sneak Peek:-

The Money Heist Part 5 Volume 2 teaser trailer was released on 13th October 2021. It was a 25-second teaser trailer. The teaser trailer also addressed that The Professor is missing and has also acknowledged by the Professor about what the heisters have suffered in the last four episodes. The Professor said in the trailer, “In the last few hours, I’ve lost people very dear to me. And I won’t let anyone else fall because of this heist”.

Here we present the teaser trailer:-

This story is based in Madrid, in the first two seasons a mysterious man named ‘The Professor’ recruits a set of 8 people who choose city names for themselves to avoid personal sharing of life in order to carry out an extraordinary, brilliant, impossible, and ambitious plan of robbing The Royal Mint of Spain.

In the next two seasons, the groups are forced to come out from their nutshell in order to save one of their members of the heist. In this season, they prepared for a second heist, this time, it’s The Bank of Spain, and again they deal with hostages and police forces simultaneously.

The Money Heist Part 5 Volume 2 is going to release on Netflix on 3rd December 2021.