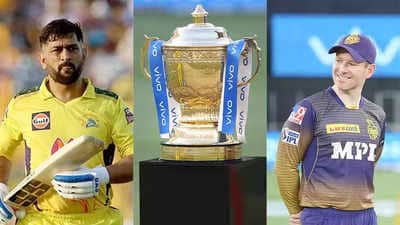 Chennai Super Kings and Kolkata Knight Riders will go head to head against each other in the finals of IPL 2021 today. This fixture will take place at the Dubai International Stadium at 7:30 pm. Both teams had an exceptional phase two of the tournament in UAE and as a result, Chennai and KKR deserve to be in the finals.

Consequently, fans are highly excited to watch this mega showdown. A victory for CSK would mean that they have held the trophy for the fourth time. Meanwhile, KKR will win it’s third IPL trophy if they beat Chennai today.

Speaking about the playoffs and journey of the two finalists, Kolkata had to face a lot of ups and down. Owing to the fact they lost their main player Andre Russell early in phase two due to an injury. However, Venkatesh Iyer, Shubhman Gill and several others stepped up in his absence to help Kolkata finish fourth in the table.

From thereon, KKR took part in two nail biting contests on their way to the finals. To explain it in few words, the middle order of Kolkata have made an meal of easy run chases after their openers have set a platform in the playoffs.

On the other hand, CSK dominated throughout the tournament. However, the Chennai side faced some defeats as the league stage came to an end. But Ms Dhoni and co regained their form against DC in the qualifier and became the first team to reach the IPL 2021 final.

Favourites for the IPL 2021 final between CSK and KKR

There is no doubt that both sides have had an incredible run in phase two of IPL 2021. However, Chennai Super Kings have a slight edge over Kolkata Knight Riders as they enter into this finals. Owing to this fact, all their players have contributed equally and have not been dependent on one player.

Whereas Kolkata’s middle order has struggled a lot during this entire season which makes them vulnerable. Moreover, this KKR side have relied on individual brilliances to bail them out of trouble. For instance, Narine’s performance against RCB in the eliminator and Iyer’s brilliant knock against DC in the qualifier 2.

Their bowling attack has impressed a lot as Ferguson, Mavi and Chakravarthy have all taken a lot of wickets in this phase. Although Chennai have a better balance and is likely to win the finals. Considering the fact, Gaikwad and Du Plessis have been in exceptional form this season. Both players are on the list of top run-scorers of this season.

Moreover, all their bowlers have fired and picked up crucial wickets when required. Last but not least Ms Dhoni finishing the game against DC gives them a great boost against KKR in the finals.