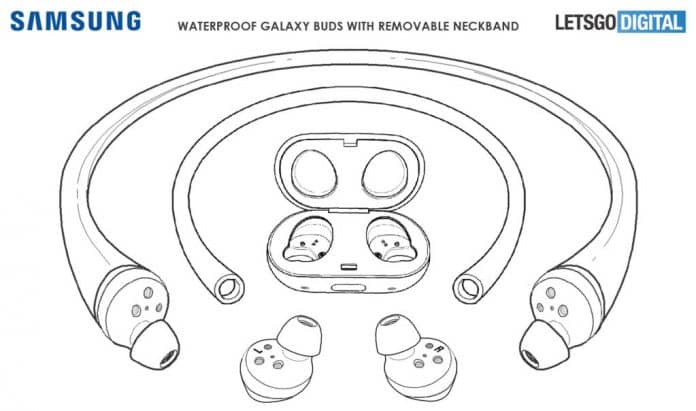 If there is a competitor that always goes toe-to-toe in the market with Apple, then it’s Samsung. And the South Korean tech giant is best known for its trolling tendencies towards the Cupertino giant. It has already offered its Galaxy Buds which is a prominent alternative for Apple’s AirPods.

They owe much of their success to the prevailing trend for truly wireless (or TWS) earbuds that go unencumbered by cables of any kind. However this design always had one flaw and it’s the potential for full ingress protection in the majority of cases.

But the latest patent by Samsung suggests that the problem is about to be solved albeit with a potentially critical compromise. The patent document is reportedly accepted by the World Intellectual Property Office (WIPO) as of September 10, 2021, and it describes devices that come across as Galaxy Buds2 successors. And will come with an additional “accessory” to “support their communication“.

The meaning of the above phrase is that Samsung is planning to launch a kind of detachable neckband that can connect the pair of TWS earbuds at the user’s discretion. We have always heard about this kind of add-on, but an OEM providing them as a first-party version is unheard of.

According to Samsung this device will cover the earbuds’ antennae on their installation, thus presumably maintaining the stereo connection between the two. Coming to the application of the new product, Samsung didn’t go much into detail about it, however, after taking a look at the design and description we can speculate that it might make the buds in question completely waterproof while in use.

Furthermore, it is now projected that the optional neckband might support the advanced health-tracking attributes with which next-gen Samsung Galaxy Buds are also now predicted to launch.  There can be many new features integrated into it such as the new kinds of calorie-tracking, and another potential feature called advanced swim-tracking.

Previous article“Hawkeye”: The first trailer of Marvel’s Hawkeye has been released
Next articleSamsung’s Exynos 2200 with AMD’s RDNA2 GPU struggles to barely beat the Exynos 2100 SoC