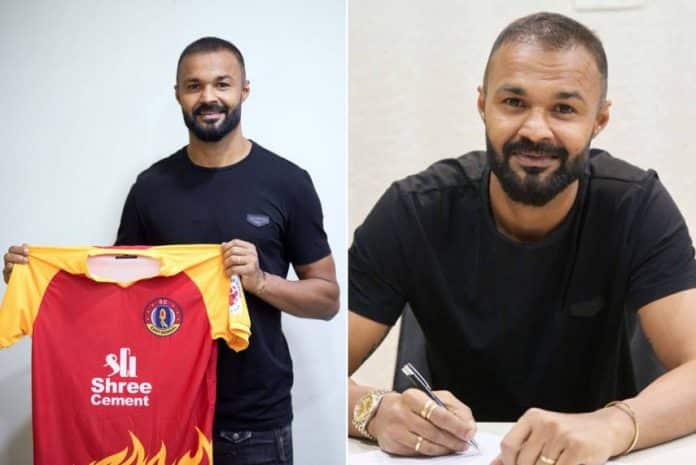 Indian Goalkeeper Arindam Bhattacharya has created a storm after he decided to move from Atk Mohun Bagan to Sc East Bengal in a one year deal. This decision came as a shocker to all the Indian football fans because he chose to move to Atk’s arch-rivals East Bengal. In addition to that, fans couldn’t comprehend why Bhattacharya moved to a different club after his terrific form last year in the ISL.

The former Mohun Bagan player had a glorious last season after receiving the golden glove for keeping 10 clean sheets. Moreover, he saved 59 shots and was one of the biggest factors to help Atk Mohun Bagan reach the finals of ISL 2021-22. After a fruitful last season, the star goalkeeper will try to replicate his form in the Red and Golden colours.

Arindam’s addition to the squad will most definitely bring a lot of experience as the 31 year old has played for eight clubs and country. Moreover he has made 140 appearances in ISL. As a result, he can share a ton of wisdom to his young teammates in the squad.

SC East Bengal did not was any time to show their excitement after signing Arindam Bhattacharya for the 2021-22 Season. The Bengal based club shared their joy by posting a video of Arindam’s signing on their social media pages. Further, in the caption, they have asked their fans for a reaction.

Arindam Bhattacharya joins SC East Bengal. He is NOT boarding the . Our GUARDIAN in Goal is staying. Arindam Bhattacharya, welcome to the family! @arindamb27. @indiansuperleague Golden Glove winner has put pen-to-paper on a one-year deal that will keep him with us till the end of the season.

How does THAT sound, #TorchBearers?

After signing a one year deal with SC East Bengal, goalkeeper Arindam Bhattacharya expressed his delight in an interview with the club. The Red and Gold Brigade shared Arindam’s goals and ambitions for this season’s ISL through a couple of posts on their Instagram page.

“I am glad to be here. I can’t wait for the season to start. I want to win as many games as possible for SC East Bengal and keep as many clean sheets as possible. I will also try and keep the dressing room very tight and together. That’s how you win trophies, and that’s what I will try and do in this team,” he said after penning the deal.“

At home, my father and my grandfather are East Bengal supporters. I have never played for East Bengal in my entire career spanning 16 years. So, when the opportunity came along this time, I grabbed it with both hands,” he added.

ISL 2021-22: Top 5 clubs that offered the most minutes to Indian players

ISL 2021-22 End of Season Awards: Everything you need to know about the award winners