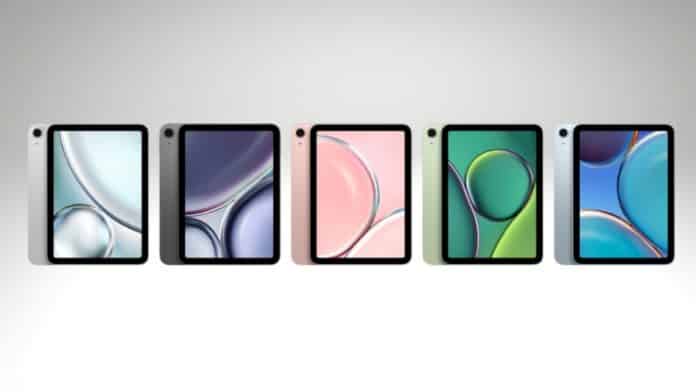 August is nearly over, meaning that Apple’s annual fall event is approaching fast, with reports stating that Cupertino may bring five new products to the table this year, including the rumored iPad mini 6. Apple’s next generation of its compact tablet is rumored to get a handful of upgrades, such as a Touch ID sensor on the power button, an A14 Bionic chip a completely reworked design, and more.

Images of the tablet were shared by a designer under the nickname @apple_idesigne. The concept is based on the latest leaks. The device will come in five colors and will have an iPhone 12, iPad Pro and iPad Air style body. As for the display, it will have a diagonal of 8.4 inches and will boast of reduced bezels. Because of this, Apple will move the Touch ID sensor to the side edge.

The renders showcase five colour options, including Space Gray, Silver, Rose Gold, Green and Sky Blue. Other than that, the complete dimensions of the tablet are listed at 206 × 138 × 6.1mm. Previously, it was also reported that the iPad mini 6 would sport an 8.4-inch Liquid Retina display with a 60Hz refresh rate.

From the looks of it, USB-C charging could also be on the table, as well as the support for the Apple Pencil. The images specify a 3rd generation Apple Pencil, which would attach magnetically to the iPad, as well as pair and charge wirelessly (similar to how the handy accessory currently operates on other iPads).

All-in-all, the new concept design basically suggests that the rumored iPad mini 6 could be a smaller version of the 4th gen iPad Air with slimmer bezels and flat-edged design.

Quite a few of reports have been hinting that Apple’s got a new iPad mini 6 in the works. The rumors gained even more traction since Apple started reportedly surveying its customers in China in order to get more feedback based on the previously released models.