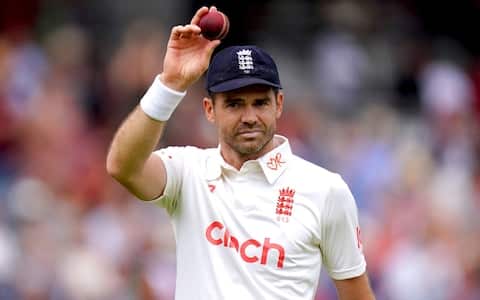 England needed early wickets in the first session of Day two to come back in the game and their bowlers provided the team with those breakthroughs. As KL Rahul was the first one to depart on Day two as he played an exquisite drive off Robinson, straight to the fielder on the cover in the first over of day two.

As a result, Rahul got dismissed by Robinson on 129. One over later, Rahane also lost his wicket and hence his poor run of form continued. Therefore it was up to Pant and Jadeja to help India reach a good total. Subsequently, the two batters started scoring runs once they settled down and Rishabh Pant lead the forefront of the partnership as the aggressor.

However, Pant played a very loose shot and threw his wicket off the bowling of Mark Wood. After Rishabh Pant’s wicket, India were 331-6 and England pulled themselves back after being out of the match after stumps on Day one.

Subsequently, Jadeja ran out of partners and Anderson completed his five-wicket haul after taking the wicket of Ishant Sharma. Consequently, Ravindra Jadeja had to get going as only one wicket was left. Hence Jadeja was dismissed while trying to score quick runs and as a result, the Indian team got bowled out for 364. Anderson was the pick of the bowlers for the English side as he took five wickets and helped England to stay afloat in the second test match.

Therefore it is needless to say that, James Anderson and the rest of the English bowlers picked themselves up after a poor first day and stopped India from reaching 400.

India did not reach the total of 400 on a good batting track and England had a chance to get back in the game. However, England could not get a good start as Mohammed Siraj dismissed Dominic Sibley from a nothing delivery. Haseeb Hameed was bowled by Siraj for a duck and as a result, the English team lost two wickets in quick succession.

Therefore England was in desperate need of a good partnership as Joe Root walked in to bat. Root looked in great touch and built a good stand with Burns. Consequently, both the batsmen almost reached the fifty mark. Just as England looked like they have steadied their ship, Burns was trapped lbw by Shami on 49.

The wicket of Burns meant that India was once again in the driving seat of the second test. England ended day two at 119 for the loss of three wickets. Therefore the entire burden lies on Root once he steps in again on Day three to continue his innings from 48 and help England cut down the lead. In the end, the second day was very eventful as English bowlers displayed a good showing whereas the top order woes of England helped India in the end.

Also Read: IND vs ENG: KL Rahul smashes a ton to Help India get to 276/3 on Day One of the Second Test