IND vs ENG: KL Rahul smashes a ton to Help India get to 276/3 on Day One of the Second Test 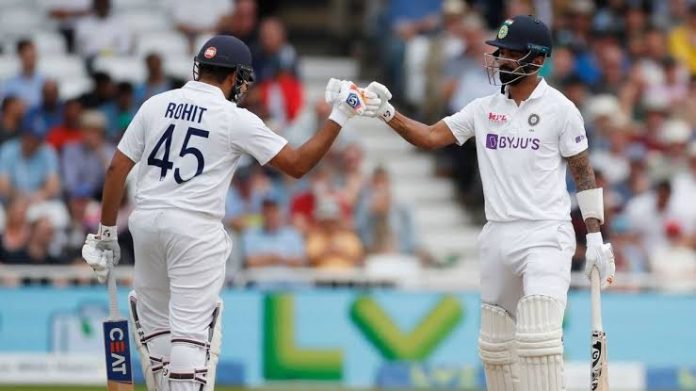 KL Rahul’s unbeaten 127 and Rohit Sharma’s 83 help India gain a significant edge on Day One of the second Test against England. With the help of these two batsmen, India ended the first day on 276/3. As a result, Indian fans would hope that Rahul adds to his total tomorrow and scores a magnificent double ton.

Moving on to the details of the Second Test, India lost the toss once again as Joe Root won the toss and elected to bowl in the second test. Losing the toss helped India for the second time, as they made the best use of batting first. Owing to the fact, that the Indian openers once again successfully negated the new ball and didn’t lose any wicket.

Rohit Sharma played the role of the aggressor as he started piling up runs quickly whereas KL Rahul held his wicket. Further, the English Seamers looked completely toothless as the batsmen sucked out their joy by leaving good deliveries and showed tremendous patience before scoring at a good run rate.

After taking time to settle down initially, Sharma displayed his wide range of shots and further frustrated the English bowlers. Consequently, he reached his half-century after lunch and was heading towards his eighth test century. However, Rohit missed out on his century at Lord’s as his stumps were rattled by a beautiful outswinger by James Anderson. Nonetheless, Rohit Sharma’s 83 gave India a strong start in the second test and put the team in a commanding position.

However, India lost another wicket quickly as Pujara was dismissed by Anderson as he poked a ball outside the off-stump to give Bairstow a simple catch. Hence Cheteshwar Pujara’s bad run of form continued as he was dismissed for yet another low score.

After two quick wickets, it was Rahul’s turn to score runs as he reached his half-century. The Indian captain also gave him good support and consequently the two batsmen started dominating the bowlers.

Later in the 77th over, KL Rahul scored a boundary of Mark Wood to reach his sixth test century and further added his name to the elite board at the Mecca of Cricket. Subsequently, he received a standing ovation from the crowd. After reaching his three figures, fans were hoping that Kohli would reach fifty before day’s play.

However, Virat could not convert his good start and gave away his wicket to Robinson on 42. Therefore India lost a set batsman six overs before stumps. But India did not get any more hiccups as Kl Rahul and Rahane ended the play without losing their wicket. As a result, KL Rahul was unbeaten on 127 and India scored 276 runs for the loss of three wickets at stumps on day one of the second test.

Therefore India would try to reach a total of somewhere around 450-500 runs as security to take away England’s chances from this match. On the other side, the English bowlers would want to redeem themselves and try to turn around this test by dismissing the rest of the Indian batsmen quickly.

Also Read: Ravi Shastri is set to exit the role as a head coach of the Indian Team after the T20 World Cup