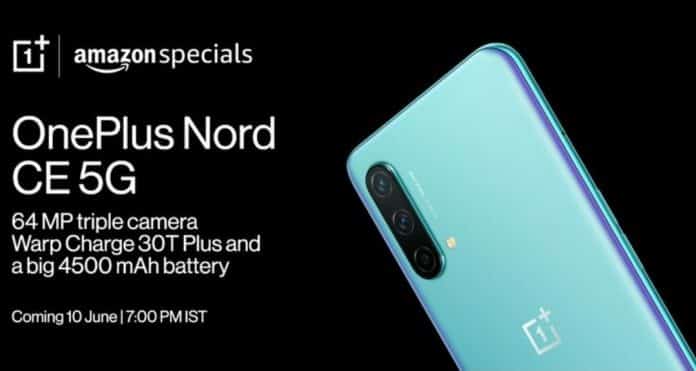 From the very first look, the OnePlus Nord CE 5G seems very identical to the previous OnePlus Nord 5G but with a triple rear camera setup. The phone appears in the similar blue colour that was present in the original Nord 5G. From the backside, we can see the OnePlus logo.

Apart from the official first look we also know that the OnePlus Nord CE 5G has a single punch hole camera, 3.5mm headphone jack and a Type-C port for charging.

The price of the OnePlus Nord CE 5G in India has been leaked via an HDFC Bank cashback offer listed on the website. The list has the pricing listed along with some bank offers for the smartphone and other smart TVs. On that list, the smartphone is priced at Rs.22,999. Most of the tipsters claim that this price is listed without tax, whereas, the tax including price is expected within Rs.24,999. The listing also shows an Rs.1,000 discount on HDFC Bank Cards. According to us, the price mentioned in the list of HDFC Bank might be the final price of the base variant of OnePlus Nord CE 5G including tax.

Apart from these, there are few other leaked specifications of the smartphone. Tipsters claim that the OnePlus Nord CE 5G will have a 6.43″ FHD+ AMOLED that will support a 90Hz refresh rate. The phone will have an in-display fingerprint scanner. Like the OnePlus Nord 5G, the upcoming CE will also feature the Snapdragon 750G chipset. At the back we can see 64MP(Omnivision)+ 8MP ultra-wide+ 2MP depth triple rear camera setups. At the front, we have a 16MP selfie camera. The will be a 4,500mAh battery that will support Warp Charge 30T Plus.