Mary Kom, Panghal and five others to fight for gold as Indian contingent aim for the perfect finish at 2021 ASBC Asian Boxing Championships 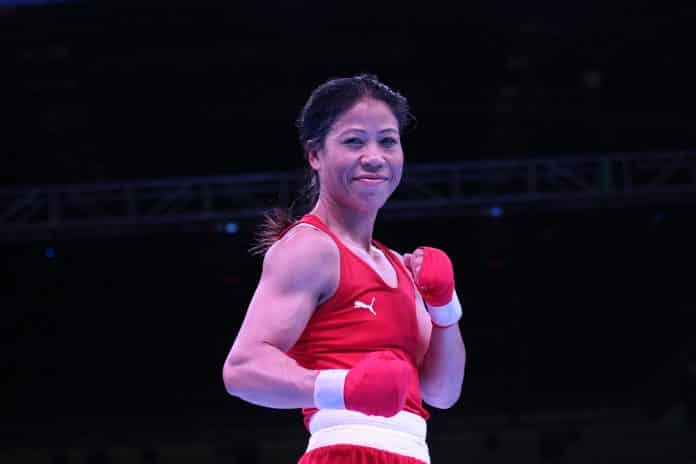 New Delhi, May 29, 2021: The six-time world champion Mary Kom and defending champion Amit Panghal are among the seven Indian pugilists who will play in the finals at the 2021 ASBC Asian Boxing Championships in Dubai.

While the seasoned campaigner Mary Kom alongside Pooja Rani (75kg), Anupama (+81kg) and Lalbuatsahi (64kg) will play their respective final bouts on Sunday, Panghal, Shiva Thapa (64kg) and Sanjeet (91kg) will be in action on Monday.

At the ongoing prestigious Championships, which is jointly hosted by the Boxing Federation of India (BFI) and UAE Boxing Federation, the Indian contingent has already ensured their best-ever show by securing unprecedented 15 medals and bettered the previous highest of 13 medals (2 gold, 4 silver and 7 bronze) achieved during the 2019 edition. The International Boxing Association (AIBA) has allocated USD 4,00,000 prize money for this Championships. The gold medallists of men’s and women’s categories will be awarded USD 10,000 while both the silver and bronze medal winners will take home USD 5,000 and 2,500 respectively.

Aiming for the sixth gold medal in just seven appearances, the veteran Mary Kom will face a stiff challenge from the two-time world champion Kazakh boxer Nazym Kyzaibay in the 51kg final. Another Olympic-bound Pooja Rani, who received a walk-over in the semi-finals, will fight against an in-form Mavluda Movlonova of Uzbekistan, who ended the challenge of the London Olympics medallist Marina Volnova in the last-4 stage. On the other hand, Lalbuatsaihi and Anupama will also face strong Kazakh boxers in their respective finals.

In the men’s section, Panghal will look to defend his title when he will be up against the Rio Olympics and world champion Uzbek pugilist Zoirov Shakhobidin of Uzbekistan in the gold medal match on Monday. Assam boxer Thapa, who has been impressive and the joint-most successful male boxer in the Championships with five consecutive medals, will be challenged by the Asian Games silver medallist Mongolia’s Baatarsukh Chinzorig. Second-seeded Sanjeet will fight against the Rio Olympics silver medallist Vassiliy Levit, who is chasing his fourth gold medal of the Asian Championships.

Previous article“Lucifer (Season 5): Part 2″- All We Know so Far about Netflix’s Most Popular Series
Next articleFormer Monaco and Lille sporting director Luis Campos in talks with Real Madrid

Tokyo Olympics: Mary Kom knocked out in the round of 16

Tokyo Olympics: Mary Kom and Manpreet Singh to be India’s flag bearers for the opening ceremony