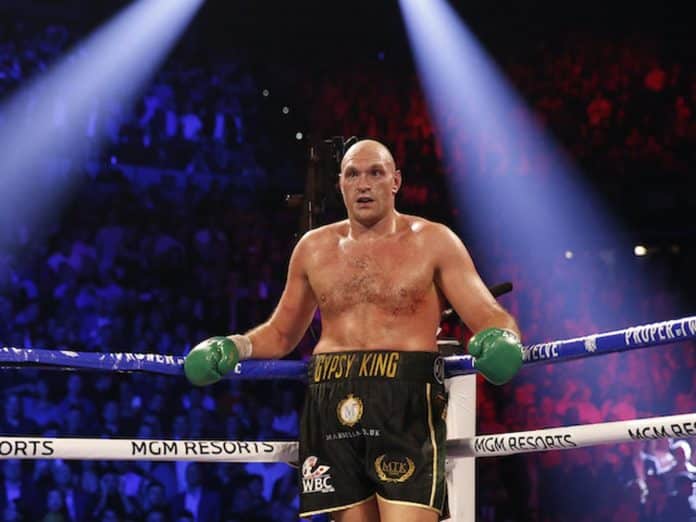 Tyson Fury has been a busy man whilst he waits for his fight with Anthony Joshua to finally go ahead. Indeed, the WBC champion has spent the large majority of his time calling out fighters whom he wants to go toe to toe with in the future. Some of the call-outs range from credible to bizarre, but also, downright dangerous. It was Fury’s offer to current UFC heavyweight Francis Ngannou, that falls under the latter, and here’s why.

The Cameroonian has only recently won the UFC heavyweight belt after beating Stipe Miocic in a brawl that can only really be described as brutal, and ultimately one-sided. Ngannou knocked Miocic out with such force that the American was rushed off to be checked over immediately afterward. The good news is that in the short term, all is well with Miocic who is insistent that he wants to get back into the octagon with Ngannou to win back the belt that he lost.

One can only assume that Miocic’s wishes don’t line up with that of his doctor given that a similar result could leave the 38-year-old with lasting damage. It’s important to remember that in MMA, the gloves that are used weigh 4-ounces, whilst in boxing that can vary from anything to 8-12 ounces. The point being that MMA Gloves are smaller, have less padding, and weigh less which contributes to a far stronger knockout, especially in the heavyweight division.

There’s No Letting up From Ngannou

The long and short of it is that Ngannou is a very powerful man who is expected to carry on at this level of excellence in the octagon. You just need to look at his next fight with Jon Jones and his meager odds of ½ to win to understand how highly rated this heavyweight is. Punters who are unaware of how those odds reflect Ngannou’s prowess in the octagon can visit asiabet.org where a thorough explanation of how betting odds in UFC work can be found. Interestingly, this page also provides an example of how much punters could win if they had bet on the fight between Francis Ngannou and Jairzinho Rozenstruik that took place in May 2020. On that occasion, it took Ngannou only 20 seconds to knock Rozenstruik out in one of the most chilling fights ever seen.

Now, with all of the above in mind, one wonders how wise it is for Fury to be calling Ngannou out. Yes, the Cameroonian is currently a specialist in the octagon but before he moved to France, the heavyweight trained as a boxer. Additionally, Ngannou has said that he wishes to return to the noble art of boxing which is yet another sign that he won’t back down from a potential fight with Fury. So, the million-dollar question, can Ngannou win?

If You Play with Fire, You Get Burned

When you take into account how far Ngannou has come in life to be where he is, both geographically and professionally, you’re left convinced that there isn’t a lot out there in the world that scares him. Indeed, the Cameroonian doesn’t shy away from any challenge and rather is the one that knocks on the door of conflict.

It’s true that UFC fighters who transition from the octagon into the boxing ring don’t always fare that well. Following one of McGregor’s many retirements, as reported at technosports.co.in, efforts were made to venture into the world of boxing, but they didn’t go well after being beaten by Floyd Mayweather.

Naturally, the big difference is that, unlike McGregor, Ngannou’s education in the fighting world was at the school of boxing. When you then add that to his ferocious power and terrifying knockout ability, well, it seems like Tyson Fury has a real, if not wholly avoidable, problem on his hands all of a sudden. This fight could be the go-to example of the age-old saying, be careful what you wish for, you might just get it.

Previous articleThe COD Warzone Team Has Banned Over a Half Million Cheaters Until Now
Next articlePOCO M3 Pro 5G Unboxing Video is now Live ahead of May 19 Launch | Specifications, Features and Price revealed