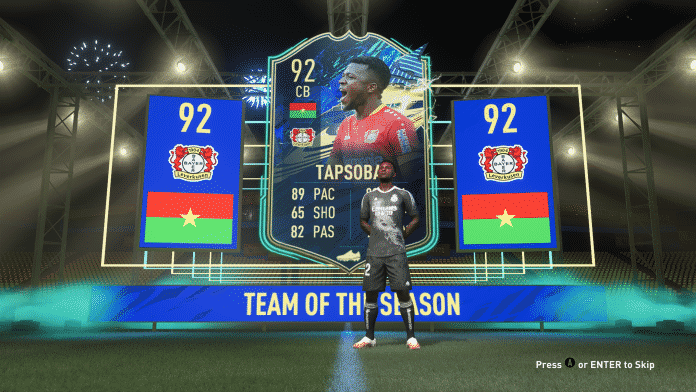 They have now also released a great SBC for 92-rated CB Edmond Tapsoba.

The Edmond Tapsoba 92-rated CB SBC is one of the best SBCs EA Sports has given in FIFA 21. The player has terrifying stats and costs just 2 teams, 85 and 86 rated, which will cost you around 300k FIFA coins. Considering the other SBCs which are available in FIFA 21, this one is an absolute bargain.

Edmond Tapsoba has a perfect height of 6’4″, which will make it easy for him to win the aerial duels. He also has a high defensive work rate along with a medium attacking work rate. The card has 2* skill move and 3* weak foot, which is decent.

The most exciting part of the card is the pace. He has 89 pace, which is insane for a defender, and it will make it almost impossible for the opponent’s attackers to go past him.

Another thing that stands apart for him is his passing. He has a 99-rated long and short pass which is almost rare in defenders. His defending and physical are also decent, if not the very best in-game, but his pace will make up for all those things. You can use a Backbone chemistry style or use an Anchor as well on him.

The Edmond Tapsoba Bundesliga TOTS card also has a power header trait which will be useful during corners and aerial duels. Overall, the card is a monster of a CB, and as he is from Bundesliga, you get many options to connect him in your defence like you can do the Flashback objective Roussillon or TOTS moments SBC Lazaro to connect with him.

The Tapsoba card goes straight into my main team and I will also be doing the Flashback Roussillon objective and play him at LB to connect him with Tapsoba. The card is terrific in-game and he can almost outrun any attacker and stop a counterattack.

So, I guess you have already got your answer to why you should definitely do this SBC. Getting a player like this for such a low cost is an absolute win-win situation. So go and hurry up. Complete the SBC and use him in your matches.