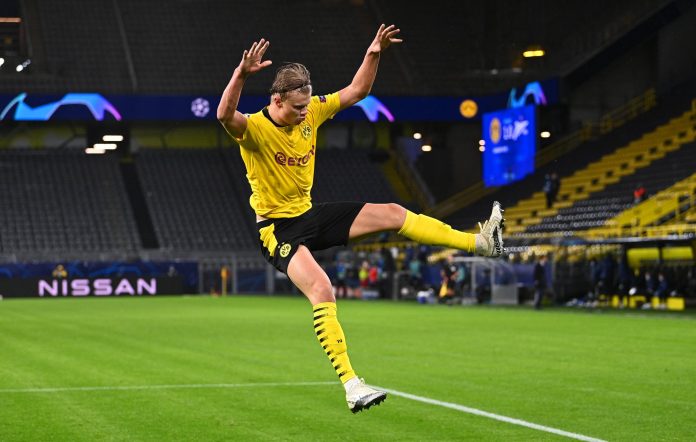 Erling Haaland recently became the first Norwegian to score a brace in the DFB Pokal final, as Borussia Dortmund lifted the cup by beating RB Leipzig 4-1. The striker showed glimpses of the legendary Ronaldo Nazario when he brushed off Dayot Upamecano and slotted past the keeper to score his first of the night.

His second goal showed unbelievable balance, as he shot past Peter Gulacsi while falling down.

With 39 goals this season, Haaland is the joint top scorer in Europe with 39 goals alongside Kylian Mbappe. They are behind Robert Lewandowski, who has 46 goals across all competitions this season and looks set to win the European Golden Boot for the 20/21 campaign.

Haaland has now surpassed Lionel Messi (who has 37 goals) and Cristiano Ronaldo (19 goals in 2021), with 22 goals since the turn of the year. The youngster is also set to finish as the top goalscorer in the Champions League, with 10 goals en route to the quarter finals.

Big clubs like Manchester City, Real And Barcelona are all interested in his services. However, it is unlikely that he will move this summer. In 2022, however, his €75 million release clause comes into play and all the big names across the continent will be in the race for his signature.

The Golden Boy will only get better with time, as tipped by experts of the sport, and considering his age, it is scary to imagine how good he could actually end up being.

Previous articleTSMC considers investing more in the U.S. as EU talks waver
Next articleGet up to 60% discount on Bitdefender security software for the first year